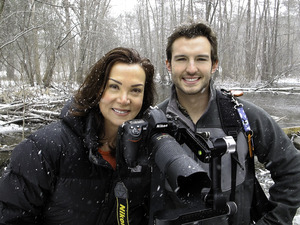 Exploration and immersion of natural and historic modes by modern means defines the work of this mother/son artist duo. Shapes, abstract and textural elements together with the connectivity of light, shadows, and reflections provide inspiration. Light sources are frequently used to capture their tableaux through the camera lens employing the technique known as light painting. Location work begins their artistic process with fulfillment coming long after digital dark room editing, developing and post-processing multiple layers of images. Linda studied film at the University of Michigan, in Ann Arbor, MI while obtaining a Bachelor of Arts, continued artistic study at the Sorbonne University of Paris, in Paris, France, was tutored by National Geographic in Sienna, Italy and on an Around the World excursion, earned a Juris Doctor and practiced law while developing her passion for photography. Theodore received a Bachelor of Arts from Denison University, in Granville, OH with art study at FAMU, Charles University, in Prague, Czech Republic and had significant cinema industry experience. They’ve had a lifetime of working in photography, have national exhibitions and collectors, have photographed on five continents and reside in Detroit, Michigan.

These images were made in 2012 at National Parks and National Lakeshores frequently using additional light sources through the camera lens through the technique known as light painting. Digital darkroom editing and processing of multiple images in our studio followed our location shoots. "Darkness Falls" and "Sickle of Valor" was shot at the Sleeping Bear National Lakeshore outside of Glen Arbor, Michigan. "Beacon of Time" and was made along the Mormon Row at the Grand Teton National Park outside of Jackson Hole, Wyoming. Match Point was made at Isle Royal National Park, Michigan overlooking Lake Superior.

This image made at the Sleeping Bear National Lake Shore outside of Glen Arbor, Michigan was at a location reachable only after a 3 mile arduous hike over sand dunes toward Lake Michigan. The setting sun with the windswept setting in the foreground evokes a timeless feeling of both times previously seen and those yet to be experienced.

This image was made in the middle of the night at the Sleeping Bear National Lakeshore outside of Glen Arbor, Michigan. The tree limbs point to the Little Dipper and are contained in the crystal clear star filled sky over Lake Michigan. Additional light sources added on location through the technique know as light painting allow for the long shadows and foreground visible with a star studded clear sky over Lake Michigan. The cool sky and warm light added to the sand give this image an other wordily feeling almost as if one have arrived on the moon.

Image made at the historic Mormon Row within the Grand Teton National park outside of Jackson Hole, Wyoming. A full moon like the setting and additional light sources were used to light the barn and trees. The long shadows were cast and were captured through the use of a vertical panorama with the star trails enabled through merging multiple individual layers of images in processing.

Isle Royal National Park, the least frequented national park yet most returned to, in the most northern point of Michigan is the setting for this image shot after a 2.5 mile hike over difficult terrain in the dark. Sunrise is reflected in the large puddles with the largest puddle glowing in the shape of the lower peninsula of Michigan. Scouville Point bears the moniker "Match Point" in this image - a true allegory to a game match where the winning point has been scored.