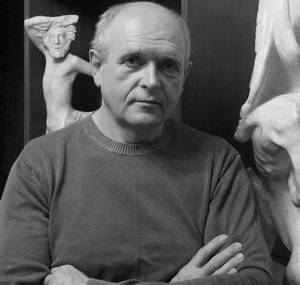 Having chosen marble as the main material, Sergey successfully embodies highest quality in unique works that are risky and challenging from a technical standpoint, painstrikingly executing the most miniature details.
By the means of masterfully carved stone, Sergey attempts to exposure the inner relation of God and Human, combined with overwhelming perfection of the world around. Sergey's marble sculptures reveal deep, sometimes torturous state of human soul, rational approach and wholesome illumination of personality's evolution.
Basing many of his works on numerous sages and ancient Greek myths, Sergey pays careful attention to vivid images carved in stone. Many of the sculptures are unique and have a conceptual meaning. Structurally based in a philosophical scheme they reveal the deepest universal concepts.
The art of Sergey Khorikov could be seen as mythic embryo developing in the skilfully created sphere revealing more and more peculiar details to the observer. To get the most of the sculpture it is of great necessity to observe it from all sides as the details captured by human eye initially, start transformation and develop themselves in boundaries between real and unreal.

Ancient Greece. On the Quest for the Truth

Why marble?
Stone accompanies the whole history of mankind starting with creation of the most primitive stone tool and finishing with persistent attempts of the synthesis of the philosophic stone. 99% of the whole history of mankind is wholly governed by the stone as well as the key notion of the God was developed by the first civilizations. Search for the perfect stone and character of the civilization are bound. Thus, creators of Ellada chose shining marble, a friendly and happy stone that fully represents the freedom seeking character of ancient Greece, the blossom of the European civilization, to build towns and execute works of art. The motto "similar is learnt by means of similar" comes from Ellada. That's why deeply personal art of creating in marble, where marble is seen as a partner with individual features, allows the author to touch the heritage of ancient Greece and try to interpret the messages that embody the wisdom of numerous generations.

What is the mystery?
Generous Greek nature shares the knowledge of the ancient times; the creation of the world and its mysterious inhabitants. Tribes of Gods and titans with their chimerical offspring, the human and titan tribes and, most significantly, the tribe of heroes on the quest for the truth which forms the human nature.The heroes and their deeds form the moving power of the humanist civilization of self-awareness. Centuries passed but many of the deeds still await their heroes among those is the most significant one - find the clue to mystery of the sphinx of Thebes. Although ill-fated Oedipus failed to find the clue, he made the question more precise. The sphinx's question now sounds as "What is a human?"

Bow and arrows is the favorite weapon of Hercules, gift from Apollo. These arrows never miss their target, their venom is lethal even to gods and they aim at chimerical monsters - kings of the past who impede development of the mankind. Hercules freed the earth from numerous horrid creatures and became however the victim of his own arrows. Bow and arrows were passed to Philocthetes who was meant to kill Paris who caused the Trojan war and broke the divine law of hospitality that was made by Zeus to open the way for the humans to understanding of the world. Arrows of Hercules is a reminder that on the way of self awareness it is necessary to work. restlessly with both hands.

Subject description:
Squeezing the arrow, Hercules is pictured in the moment when the wrath of the past reached its hand to him. The wrath he was fighting against all his life. Thanks to unusual compositional solution observer's attention slides from the hand with an arrow, to the face twisted by pain. Various techniques of marble carving in combination with metal gives the image dramatic tension.

The supervisor
Prometheus is one of the creators of the modern human being, he is benefactor and supervisor. Having appeared under different names at different stages of the human history Prometheus generously presents new knowledge to the mankind. So, in Egypt in the role of God Tot, Prometheus creates writing and therefore connected past and present. In Greece he creates philosophy. During favorable times Prometheus appears as a person and talks through philosopher Heraclitus:"Everything floats, everything changes". At difficult times when the notion of personality has been prohibited he is called for example Dr. Faust and tackles the problem of understanding the purpose of the mankind. Truly generous to people he presents gifts and takes away the illusions.

Subject description:
Sculpture of a male with a snakelike tail going into the ground and arm developed into wings. The charismatic image is extremely strong and creates the feeling of the flight. The sculpture is slightly tanned and polishes that gives it an ancient glance. Technically very complicated sculpture still embodies the feeling of lightness and slim silhouette.

Aphrodite - Urania is the image that came to us from ancient depth and embodies the essence of centuries as well as embodies the major gift generously presented to the mankind. It is the ability of creativity that is nothing but miracle of giving the shape to the thought that has been acquired by the mankind throughout its existence.
The artistic realization of the thought creates stairs by climbing which the mankind hopes to meet the creator.

Subject Description:
A fragile image of the naked standing female emphasizes celestial spiritual aspect of Love. The sculpture is perfectly composed, technically perfect, the marble is polished which produces great impact on the observer.

Silenus is the ancient titan whose life covered all five centuries of the mankind. He walked the Earth, saw everything, participated in events and has a lot to tell to the careful listener. The kind welcome of Silenus by the king Midas has been generously rewarded by Dionis. Silenus agrees to supervise Dionis on one condition: "The question should be precise".
Tales of the ancient times communicated by Silen seem like mysterious fiction to unprepared listener that causes problems only to the listener as Silen is always honest and doesn't make up anything. The major difficulty of understanding the narrator can be explained by fact that his tales come from the most ancient times of the mankind and the essence of the stories can be completely understood only by the listeners of our time which more listeners.

Subject Description:
Fine white marble sculpture of a mythological character, a male with goat's legs is seated on the flat stone with half turned torso, one arm on the knees and another supporting the flat stone. The sculpture is perfectly composed, combines various techniques and produces great impact on the observer.