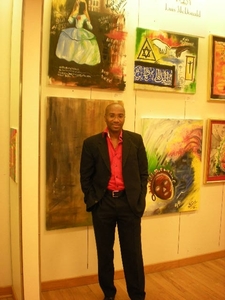 McDonald won his first drawing competition at the age of seven and began studying fine arts at fifteen. After finishing his military duties in the navy he soon moved into fashion after obtaining a scholarship from winning a drawing competition on national television in his native Dominican Republic.

Seeking for a new begining, Luis moved to United States in 1990.

He has received several prizes including a "Certificate of Appreciation" from Metropolitan Dade County Florida in recognition of his valuable contribution to the community. Also numerous scholarships have being granted allowing hem to study in Miami International University of Art & Design, where he received two "Honour Mention" awards from Air France and Art-Deco Period drawing contests; he also attended the Fashion Institute of Technology in New York and the Instituto Tecnologico Mercy Jacquez in Dominican Republic.

Coming to Europe to study in 1998, McDonald attended the Centre de Formation Professionelle des Arts de la Mode, FORMAMOD in Paris. Soon after he finished his studies, he moved to the UK.

He spent almost a decade living and working in London where he had the chance to develope his interest in art.

The metaphor that his artwork divulge can be perceived on each and everyone of his creations; oil, acrylic, water colours, pastels and ink are freely applied on canvas, board, paper, etc. creating a very unike body of work.

Luis McDonald is fluent in several languages including English, Spanish, French and Portuguese. He is a member of the Oil Painters of America.

Colours are applied on with no regreat in a pure effort to "set free some of the energy that lay trap on the medium".

“Grand mom and I”

“My Grey Autumn I”