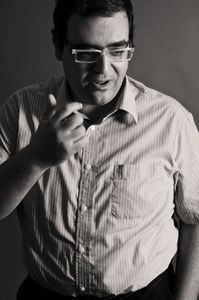 Sergio Muscat is a young artist working in the photographic medium. His work is instinctive, sensitive and contemplative, focusing on a reality that is continuously changing through the evolution of nature and the intervention of mankind.

His work in Architecture Photography has been received with critical acclaim, and has earned him a Fellowship of the MIPP and SWPP. He has always stated that his “natural habitat” is on the street, observing the environment, society and the eternal battle between mankind and nature. Sergio’s work has garnered various awards, including the “Press and PR photographer of the year award” from the SWPP in 2008 and multiple nominations in the International Masters Cup and the Black & White Spider Awards in 2009, 2010 and 2011.

His work has been exhibited locally and overseas, and is found in private collections across Europe and the US.

See a presentation of Sergio’s work on youtube: http://youtu.be/NQqdH6b0LCA?hd=1

During the 1920's and 30's, Alfred Stieglitz photographed a series of clouds. He called them "Equivalents". This title was based on discussions which often emerged at Gallery 291 in the previous years. They stemmed from Kandinsky's theories, particularly the belief that colours, shapes and lines reflect the inner self, the emotional "vibrations of the soul".

Over the years I have been searching for that inner self through photography - a search which I know will never end. I believe that allowing instinct to play a major role in the photographic process is key in the creation of a free flow between the inner self and the photograph.

This instinctive photography features very strongly in my work, both at the capture stage and also at the post processing stage. In this set of images (which will certainly continue to grow), I try to explore the "soul" of my surroundings, and my own, through a technique which on one end creates a layer of abstraction from the physical manifestation of things, and on the other end creates a collaboration between myself as a photographer and nature itself, by introducing that unknown, uncertain, or "random" factor into the image. Not having full control of the final image allows for a connection with our surroundings that is almost tangible and certainly real.

"Rather that being told what these places look like, we are reminded of what they feel like." - Joe Zammit Lucia [Article: http://bit.ly/KAL3et ]