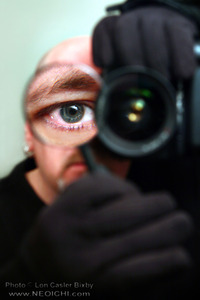 Photographer Lon Casler Bixby has been on the cutting edge of American art and music for more than a decade.
While studying at the University of Texas, Lon directed short films that won him awards at the Berlin, Hong Kong, Houston and Australian International Film Festivals. After graduating with a Bachelor of Fine Arts degree, he produced national commercials and industrial videos for many major companies, while at the same time managing some of the area's hottest bands.

After reaching top of the Dallas indie film and music world, Lon moved to Los Angeles, where he produced, directed, and wrote movies and television shows that have been released worldwide. His most recent productions, Tales from the Dead, and ManBand!, are being distributed in both the United States and Japan. Manband! features Fantasy's Core, one of Japan's most influential new rock groups.

Lon is also a professional photographer who has been published in a wide variety of magazines and whose work includes commercial photography, fashion, fetish and erotica, and has gained him a growing reputation in LA's art scene.

And as a photographer, I’m fascinated by all aspects of the feminine. Flesh, light, costume; make-up, props, scenarios – I use all of these to highlight the feminine spirit I see in my models.

Although I like to think of my photography as “Dark Art” – dark in visual impact, in tone, in subject matter – Lately, I’ve been stepping outside my comfort zone; experimenting with negative space, color photography, and with a much brighter tonal range.