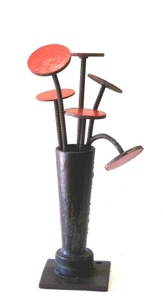 Jim Adams took up artistry in iron and steel after 24 years in the information technologies field. Prior to his years in IT, he had worked in the welding industry, selling specialty welding items for approximately 8 years. During that time developed the skill and knowledge of working with metals. His desire to do artful things with this knowledge was something of a ‘back burner’ interest that never seemed to go away.

In mid 2007, Jim decided to pursue the creation of artful things from iron and steel. The company ADAMS-FERRO Inc was set up to create and make available to the public objects of art in iron and steel. Practically all of the works are created from ‘rescued’ objects – scrap metal destined for the melting pots. Shapes and qualities of these various pieces of scrap become the inspiration for the works. Jim’s approach is to find and create beauty or thought provoking aspects from the many times unique characteristics of the items he finds – a piece of rippled metal becomes a wave, a large industrial gear becomes a flower blossom – and with a minimum of addition or cutting away, he brings that quality into the work.

The works created are diverse in themes, from surreal steel flowers, to representation of aspects of humanity, to thought provoking abstracts. The work is minimalist in construction; its nature is raw and powerful.

Most of these works are solid and substantial and can be displayed outdoors as well as indoors. Weathering only adds to the rich coffee colored patina the works possess. Some of the works can become a focus point in a garden. Much of the works want to sit on a pedestal and be an exclusive center of attention.


Gallery exhibition, past and present:

Perlow- Stevens Gallery, Columbia, MO. Work to be exhibited in their Spring 2012 show.

‘People in Wood and Steel’ - a collaborative exhibition of works by Ron Collins and Jim Adams - JoMar Visions Gallery in Houston, TX - Dec 9, 2011.

This is a series where the features of whatever delightful piece of scrapped machinery I chose became the direction for the work. Most of these pieces are minimalist and fairly compact. I've been very fortunate with this series.

This piece is created from valve floats saved during the deconstruction of a sugar plant.

Created from RR track clips. This is an exercise in being able to take something which is fairly mundane and ( if one has many of such items ) bring out something interesting. This piece is now in a private collection in Manhattan, KS

This piece is created from a worn butterfly valve from a cement conveying system.

Created from a part of an drill rig blow out preventer. I was allowed to rescue some items from a badly burned up drill rig. As soon as I saw this piece I was seized by the thought of a Polynesian diety.

Created from a worn butterfly valve from a pneumatic conveying system for powdered cement.

This piece created from the barrel of a worn out jack hammer.

Created from an industrial nozzle of some sort ( ductile iron ) and various odd pieces of steel.

“After the Rain - Mushrooms”

Created from a fairly large pinion gear. My vision is a chunk of tree root - the last to rot away from a tree's stump.

Is an explanation necessary here?

Gary Larson hit me hard. The chunk of tire tread set the voices loose on this one.

“Do We See Each Other Yet”

I was given the little round piece by a gentleman who has a machine shop, not certain of what it was originally. I saw a circular bench like one would find in a park. The steel people are created from miniature RR spikes.

Created with something of a utilitarian character. The vertical member is positioned at the edge of the base. Can we imply 'bookend' without suggesting functionality. The piece was pretty green when this image was taken. .

A collaborative piece with Liz Conces Spencer. This piece was created for the Houston Area Women's Shelter. This is one of the few cases where gender had to be defined - something of a challenge.

Created from a small refrigerant pump and standard RR spikes.

Created from the crankshaft from a small air compressor and standard RR spikes.

What else can you do with a meat grinder. Fun and whimsy. Steel people are created from miniature RR spikes.

Personal pain and catharsis in this one.