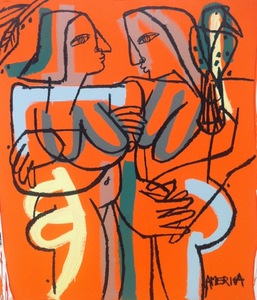 JoAnne Artman opened her space at 326 North Coast Highway in Laguna Beach in 2008, presenting vibrant and eclectic exhibitions. Her roster of artists are rooted in her obvious passion for the artist's individual voice and mastery of technique. All artists are award-winning, and their works have been shown and collected in museums and private collections in Southern California, around the country and internationally.

AMERICA MARTIN is a Colombian-American fine artist based in Los Angeles. She is a traveler between mediums, insouciant in the conquest of new terrain. Martin’s favorite landscape is that of the human form, her work is distinguished by a command of line and color, making playful reference to both classic and indigenous art forms.
“The artist cannot be idle. It is only duty, love and discipline that make art. Inspiration exists, but it has to find us working. The artist is gluttonous, constantly devouring life in order to translate all that she sees, smells, lives or breathes into her own language. Why, and for what? For the blistering personal joy that comes when one is doing something of and about truth. There is no choosing this life. An artist paints because she must.”

James Verbicky was born in Canada in 1973 and began painting with oils and acrylics at the age of four. His works have evolved along a continuum that marks the transient moments of contemporary life with embedded objects, symbols and movement in layers of color. After struggling with legitimacy for many years, Verbicky finally attained the rarely bestowed “Extraordinary Ability Greencard” from the United States government due to his involvement with a myriad of galleries, prominent art collectors, publications, museums, and charity organizations across America.

In 2008, Verbicky was invited to join the juried exhibition of the Societie Nationale des Beaux-Arts (SNBA) at the Carrousel du Louvre in the Louvre Museum in Paris, France. Verbicky was among only twelve American-based artists invited to join the SNBA show, which had been in existence for over a hundred years but had only the year before begin accepting any American delegates.
Verbicky was first recognized in California for a commissioned piece done on one of the Frank Gehry Spheres displayed at the Hollywood Bowl. Today he shows widely in galleries as well as fine and famous homes across North America, including the Frank Sinatra Estate in Northridge. Current collectors include the new face of Calvin Klein, Lara Stone, actor Cameron Mathison, and the Chicago Art Museum. His work has most recently been featured in Riviera Magazine Orange County, Luxe Magazine, Kontact Magazine, Bespoke Magazine, and as part of the 2008 Emmy Awards Celebration.

Jane Maxwell is a mixed media artist based in Boston, MA. Her current work largely focuses on women, body image and the feminine ideal. Her collages are deeply layered works, combining color, texture and text that surround and become the female figure. Jane's work is shown in major galleries throughout the country and has been collected by art patrons around the world. Recently, Jane was selected to be included in the 30th anniversary edition of 'Who's Who in?American Art.'
She has been a guest lecturer at Wellesley College, Stonehill College and The New England Art Institute, on the topic of body image and art. Her work has been the focus of numerous newspaper and magazine articles and has been featured in many art books, including Collage for the Soul (Rockport Books) and Mixed Media Collage (Quarry Books).
Maxwell's artistic voice grew out of a passion for vintage materials, modern fashion and design - mingled with a deep fascination for pop culture and female icons. In the late 1990's she studied mixed media at the School of the Museum of Fine Arts in Boston and at the Decordova Museum School in Lincoln, Massachusetts. She graduated with a BA in Literature from Middlebury College in 1986 then worked in the public relations industry for 10 years. She is married with three teenage children.

Born in Belgium in 1969, Anja Van Herle combines a European sense of high fashion in her artwork with an American sense of wonder. Her childhood years were devoted to exploring the fundamentals of her art using crayons, pencils and watercolors. In 1987, she enrolled in Belgium’s Higher Institute for Art Education where she earned a Master’s of Fine Arts in Painting. In 2003, Anja relocated to Los Angeles, where she now concentrates on figurative paintings that are inspired by both classic and contemporary fashion while exploring issues of identity, emotion and human interrelationships. As timelessly chic as Audrey Hepburn in Breakfast at Tiffany’s, Anja’s women are playfully sexy, and their expressions and eyes tell stories that go far beyond the simple exhibition of fine fashion. In Anja’s masterful hands, fashion becomes alive. “These women—they feel.”
“My work is an attempt to capture the complexity of emotions that are conveyed in the human face. I’ve been painting portraits since I was a child, continually drawing closer to the face and eyes in order to explore the emotions they contain. There’s a story behind every face; my paintings are an attempt to tell these stories by capturing delicate facial expressions and juxtaposing them with vibrant color and the dramatic interplay of shadow and light that both inform my subjects and maintain their enigmatic aura. I’m constantly delighted by the various interpretations my work receives. For some, a subject may be pensive, while to others it may be seductive or confrontational. Part of the viewing experience is for a viewer to attach his or her own emotional meaning to a work,”-Anja Van Herle.

Within the space of a square frame, I try to build a world that is undeniably separate from the one we live in. What fascinates me about any artistic medium is that it can pull the viewer out of a logical and common world, and place them within a space that is more alive. When I use a square frame, I hope that the viewer will forget that they are looking at a photograph and instead see an alternate reality, one that mixes painterly qualities with surrealism and fantasy. It is my goal in photography to make beautiful that which others find disturbing, to take a simple concept (be it birth, death, or something in between – life) and mold it into something complex and magnetic.
I explore death and surrealism through my photography in order to show that reality has intricate ties with fantasy. Our world is not so different than the disturbing worlds I create within my frames. I argue that my surrealistic images are even more representational of life because they contain feelings and emotions that resonate with the viewers. Sometimes life does not have to be photographed according to reality; instead, why not explore the depths of the mind and soul and reach for something deeper than the reality that plagues us and traps us daily.
My edited photographs are a far cry from the original image that comes out of the camera. I add texture to them to give a feeling of grime and age, thus giving the photographs a timeless feeling. I often play with the tones so that the subject is highlighted and the scenery falls away in to slight desaturation and abandonment. The real crux of my photography is portraiture; it is capturing the emotion of a single instance in a life.
There is a particular feeling to all of my photographs, one that touches on the juxtaposition of the real yet surreal, a fantasy and a dream yet riddled with reality.

“In and Of Earth”

International artist Rimi Yang portrays the Yin and Yang of life and its uncertainties. Her emotional work explores the human psyche and its relation in connecting to polar opposites. Yang’s paintings are both dramatic yet whimsical, showing both Eastern and Western influences. Stylistically, she illustrates an attraction as well as repulsion to abstract expression. Her use of thick painted surfaces applied with gestural brushstroke point to the characteristics of abstraction; the attraction. These stylistic elements are reminiscent of artists such as Diego Velasquez and Edouard Manet. Yang’s portraiture is similar to that of Velasquez, as both contain a heavy use of paint and texture. The same painterly quality is also seen between Manet and Yang. Rimi Yang portrays the duality of her relationship to abstract expressionism by painting figurative work. Her subject matter is the repulsion to abstract expressionism depicting portraits, landscapes, and still life; all elements of the figurative approach. Her method is loose and spontaneous. Often, monumental-sized paintings can be completed within days. She celebrates the moment, the emotion, and materializes it onto the canvas.