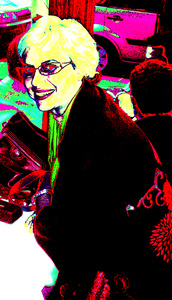 Suhair Sibai was born in Syria in 1956. Through her work, Suhair explores the concepts of identity and the Self, using the female form as her preferred medium. According to Suhair, who was educated as an artist in the sprawling metropolis of Los Angeles, the level of multiculturalism and diversity to which many of us are exposed to these days has the potential to cause the discord, displacement, and division of the Self. As a result, as Suhair posits,

‘Ideas and ideals are mingled and morphed; metaphors are understood and misunderstood according to context and audience; cultures cross and clash. All the while, the authentic Self – if there is one – is via distortion, alteration, and compromise, made and unmade, struggling for accessibility to popular culture’.

Accordingly, Suhair strives to determine who we are as individuals, and how we came to end up in our current predicament. Using emotionally-charged colours, Suhair intentionally provides a contrast to the melancholic narratives, which are intended to ‘create alienation among audiences’. As well, the relatively large sizes of her works are meant to engage her viewers, and ultimately, by combining the emotional elements of her work with their own ‘biases’, Suhair’s audiences are able to experience something totally unique.

Suhair currently resides in Los Angeles, where she works as an artist full-time, and exhibits her work. In addition to LA, Suhair’s work has been received with great enthusiasm elsewhere around the world in Europe and the Middle East.

The paintings are Figurative/Expressionist in style, and the technique is, mix-media and paint on Canvas and artist's paper.
Some are available as a "Limited Editions" Signed and Numbered by the artist.

“At Night She Weeps!”

“Woman in a Black Dress”