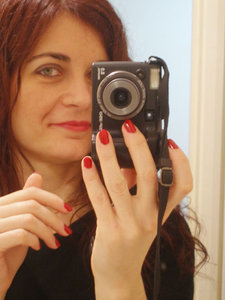 Born in Greece. After she was awarded a Greek State Foundation scholarship she moved to UK to complete a PhD in Arts and Communication at UCA. She is currently based in UK working as a fine art photographer, curator and photography lecturer. Her artistic practice has been concerned with the perception of space, particularly of empty space from a psychoanalytical perspective, and the photographic representation of it in an abstract form as presented in her projects ‘Empty Space’, ‘Part Objects’ and ‘Red Space’. She was selected for the Bloomberg New Contemporaries 2008 exhibition among numerous solo and group shows.

This project explores the relationship of the abstract photographic image to notions of interiority and exteriority as these relate to the transition from the unconscious to conscious reality. The photographs negotiate an abstract space of emptiness as a potential space of abstraction between a psychic space of subjective projection and an objective material space of aesthetic contemplation. This exploration draws mainly upon Donald Winnicott’s psychoanalytic ideas of transitional phenomena in an intermediate area of experience between the internal and external reality. Within this area – the potential space, creativity originates as a zone of fictive play and free mentation that facilitates the subject’s journey from ‘what is subjectively conceived of’ to ‘what is objectively perceived’ throughout his/her development towards adaptation in the reality world.

Flirting and playing with the real I enter a performative creative process where I intervene in the construction of the images with the gestural act of placing pieces of thread in the space of reference. Out of this play abstraction emerges as a journey about the real, a journey following the route of a circle; beginning in the real world, withdrawing to an inner world of unconscious processes and returning back to reality. The line that draws this space is both abstract and concrete, both abstract and figurative creating multiple directions in a photographic space of emptiness, which eventually appears full of potentialities waiting to be realised. It is a transitional line, which implies that the relationship between inner and outer reality can be performed and can become a space of action and intervention.

This series is an exploration of my creative play with the objects in my surrounding space. I use these objects as demarcation marks to dissociate the empty wall surface from the rest of the room and define it as a separate territory by ascribing it with a degree of visual significance. The empty pictorial space of the images becomes then the centre of attention in relationship to the referentiality of the part objects that surround it.

These photographs present a double world of perception; the objective world of objects and the optical world of visual forms, the one struggling against the other in a creative abstract tension on the photographic surface.

‘Red Space’ constitutes a development of the project ‘Empty Space’ and follows a similar approach to exploring the notion of abstraction in photography. Here, instead of the pieces of thread I use my menstrual blood as a way of intervening in the space and playing with reality. In addition to the associations related to the female body, notions of birth, and performance, these images share strong similarities with abstract expressionist paintings. They raise further questions about how space can be represented in abstract photography and about the status of the photograph itself as an abstract image.

'Slash, 2010' is an artefact, a document of Photography, in a conceptual play to subvert the idea associated with it of seamlessly recording everything that stands out there in the world in front of the camera’s lens. I enter a performative act of slashing the surface of an unexposed 5x4? black and white negative. A cameraless image produced from scanning the processed negative becomes the witness of this violent act as it carries all the traces of her forceful gesture that disturbs the flatness of its seamless surface. The visual result is an abstract pictorial space, which seems to be ‘bleeding’ from the traces caused by the deformation act of slashing.

My work is concerned with issues regarding the utopian idea of ‘flatness’ of modernist painting and the ‘seamlessness’ of photography, which I challenge by engaging in the abstract expressionist act of slashing the medium’s surface that resonates with Lucio Fontana’s 1960 Spatial Concept `Waiting'. But unlike Fontana’s elaborate act of cutting the raw canvas, here I have forcefully violated the surface of the negative in an attempt to beat its resistance. Blindly handling the negative in a dark bag, my only guide were the tactile sensations between my hands and the materiality of the negative.