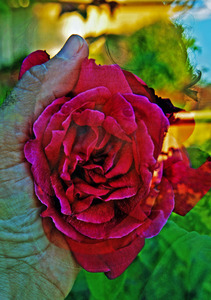 Johnny Nicoloro is an award-winning artist whose signature style of double-exposed compositions created entirely in his camera produce unique and visually compelling pieces.

Most recently, May 2012, Johnny presented a solo exhibition of his work Visions of Virgins at The Annex @ Core New Art Space in Denver, Colorado. Westword Magazine selected Johnny's exhibition as one of the five hidden gallery shows to see for the Memorial Day weekend.

In April 2012, Johnny's piece "Boyle Heights" was one of the first to sell at T4C (Thanks for Creating),  a feature presentation of BritWeek in Los Angeles.   His other piece in that show, one of a limited-edition "Latin Market in Korea Town", also was sold.

From July-November 2011, Johnny presented a five-month highly-acclaimed solo exhibition at The Latino Museum of History, Art and Culture in Los Angeles entitled Virgins of Los Angeles. The Latino Museum is a fan of Johnny's art, having previously displayed a four-month exhibition entitled Las Virgenes - Visions of Inspiration with Ofelia Esparza.  Eight pieces from that exhibition -  which ran from December 2010 through April 2011 -  were acquired for the museum's permanent collection.

In June 2011 he was juried into in the Los Angeles Art Association group show Out There at Gallery 825 where his piece "1 of 18,000" was again one of the first to sell.
His pieces were also juried into two group exhibitions in 2010:  Hybridity: American Unity at the Latino Museum (his piece -"Freedom to Marry Mary" -was acquired for the museum's permanent collection) and Gateway to Imagination: A National Juried Art Competition at the Farmington Art Museum in Farmington, New Mexico. He was invited to exhibit in Concantation: The Act of Linking Together at the Los Angeles Center for Digital Arts.  Johnny also held a three-month long solo exhibition at Ed's on Robertson Blvd. in West Hollywood.

In September 2011, Johnny was awarded first  prize in photography from The American Art Awards for his piece "Santa Fe w/Steve."  He also took home a first and second prize from The AAA in 2010. Additionally, the LA County coordinators of SoCal for Jerry Brown named Johnny the honorary photographer for Brown's 2010 campaign for Governor for his series of double-exposed photos of Californians with the moniker "Jerry."

Over the past few years, Johnny has turned the focus of his camera on the Virgin Mary, one of the most revered and iconic figures in the world.  "She has always been a place where I would go in my spiritual journey if I was having difficulties," Johnny recounted in the article "Chasing Virgins" for Cafe Libre.  "I feel blessed that I have a natural affinity for spirituality. It came very easy for me. Growing up Catholic and saying the Hail Mary - it's such an easy prayer to say ..."

His affinity for the Virgin Mary led to a solo exhibition LA Virgin at Lot 44 Gallery in downtown LA.  Curator-at-large Lui Sanchez described Johnny's work this way: "His creative mix of the spiritual icon with commercial, political and community imagery gives rise to the passion and compassion the Virgin Mary evokes as an iconic image.  Johnny's imagery of double and triple exposures, blurred textures and off-kilter compositions vibrate the spirit of Nuestra Senora de Guadalupe and other incarnations of the Virgin Mary amongst the frantic streets and alleys of Los Angeles.  His Virgins explore and expose our own spiritual, political and economic struggles and perhaps counters such struggles with a glimpse of passion, spirituality or faith that many Latinos recognize but may also speak to non-Latinos, parishioners and Atheists."

Johnny has turned his art pieces surrounding the Virgin Mary into a series of inspirational note cards for all occasions  (www.VirginMaryNoteCards.com).

A native of Los Angeles with a BA in Theatre form UCLA and self-taught camera artist, Johnny has also taught Creative Photography for Personal Growth at The Village in Hollywood and is an art and photography instructor for CoachArt, a non-profit charity providing free lessons in the arts to kids with life-threatening illnesses.

All of Johnny's work is available for purchase. He can be reached and his work can be viewed at www.NicoloroPhotography.com
Follow him on Pinterest (Johnny Nicoloro) and on Facebook at Virgin Mary Note Cards.

“Mom's Agapanthus and Hydrangea no. 5”

“A Birthday Gift for Mom”