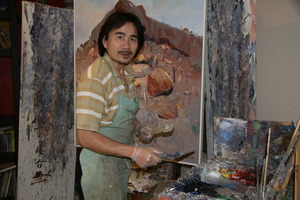 Ji Chen was born in Shanghai. He completed his Bachelor of Arts degree at Shanghai Drama Academy in 1984 and later worked for the set designer for the Beijing Opera Theatre Company of China. He set designed works include drama, TV drama and Movies. His watercolour work ‘pool’ which won a prestigious national award and exhibited throughout China.
Ji and his family arrived in Australia in 1989. Here the strong colour and bright light of the Australian landscape provided a new artistic experience-‘In Australia the weather and therefore the landscape is the best teacher. I look and I learn’. Ji‘s unique style is his trademark- the loving softness, born of a freshness of eye and a passion for open spaces. His love and passion for the vistas and vast horizons of the Australian landscape is obvious in his works.

In 2005 his painting ‘Rough Sea’ won the $20,000 Best of Show Gold Medal Award at the Herald Sun Camberwell Art Show in Melbourne. In words of the Chief Judge at Camberwell, Michael Berry:
‘This work stood out as exceptional for its masterly use of broad paint laden Zen-like brush strokes describing, forming and punctuating the picture plane’s space in single spontaneous sweeps of drawn energy-truly remarkable. The development of perspective is unusual and innovative being fully realised in the rear, middle and forward fields of the picture plan, then pushed further into the forward field (rocks) off the canvas into the space inhabited by the autonomous viewer outside the picture plane. Added to that is the quite unusual exploration of the oblique vanishing diagonals and such multiple focus shifting vanishing point shifts as previously found in master works by Bruegel, Pollock and Matta- few in this country even understand the language let alone are capable of actually painting the space.’

During those years he also had many solo and group exhibitions in many art galleries in Adelaide, Sydney, Canberra, Melbourne , London and United States. The Australia Artist Magazine has featured ji‘s paintings four times so for. His works are represented in collections within Australia and overseas.

This is a portfolio of works of various styles, some of which were experimental and personal.

“The Bridge from George St”