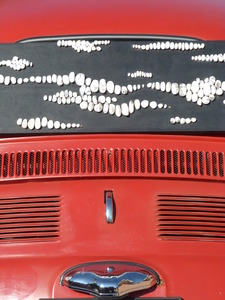 I was born in Italy and, after classical studies, graduated at the international School of Mosaic of Spilimbergo in 2007 where I learned the main mosaic tecnhiques, terrazzo flooring and stained glass. A study grant for a year of specialization followed so I kept attending the School until September 2008.
Between 2008 and 2010 I've been cooperating with some local mosaic workshops, expecially MosaicPRO of Pastorutti & son in Spilimbergo and I partecipated in some restoration projects abroad (Memorial of Moses in Mount Nebo, Jordan), whilst working on my own projects.
In the same period I participated in some Art exibitions in northern Italy with some fellow mosaic artists.

Since I was at school I always took part in the installation of the mosaics, looking forward to acquiring the knowledge of the whole process. In fact, creating a mosaic and placing it are two different things and I believe that a good competence on both sides is surely a good way to avoid most of the problems and to ensure a good job.

In January 2011 I moved to Canada to work at the Mosaika Art&Design Workshop based in Montreal, Quèbec, which is rewarded as one of the best in North America. We manufacture big mosaics for mostly public but also private art. I am part of the installation team too.

In October 2011 I moved to British Columbia for several months. I spent a period between Vancouver and Victoria and got the chance to work with some renowned mosaic artists.
With Liz Calvin, Glen Andersen and his enterprise Mosaic Planet we produced and installed a floor mosaic for the Mounted Police of Richmond, BC.
I then worked with the artist Shylene Schlackl and the association Mosaic the City in Victoria on a mosaic for the Community Unity (Sundance Mosaic Project).

My works can be seen in Canada, Italy and the USA.

I'm currently working between Canada and the United States for Mosaika.

This series represents some music icons of the '60s and the '70s translated into mosaic. Only river pebbles have been used to repruduce these icons exept for Janis Joplin, for which I used marbles and some Caribbean pebbles too.
Almost all of these have been sold already, but I can reproduce any of your favourite musicians on commission... a mosaic is forever!

Here are some of my mosaics made of smalti glass and other coloured, bright materials made expressly for mosaics.
With these materials you really have the possibility of playing with the surface, its dimensions and its shades.

This mosaic represents a detail of a painting of the artist Jean Mirò. Modern and direct technique, made of smalti glass, marbles and steel inserts. Dimensions 42 X 70 cm.

This is a tiny three dimensional smalti project. I wanted to create a small, bright, pop mosaic which could fit anywhere so I decided to shape a Vespa out of a piece of styrofoam and cover it with smalti splinters to get this "furry" feeling. Its dimensions are 20 X 10 X 8 cm and its weight doesn't exceed 4,5 Lbs.

This mosaic chessboard is made out of smalti, avventurina and marbles in a metal frame. Regardless of the fact that it's almost perfectly flat, its surface does vibrate under the light. Dimensions 40 X 40 cm. Chess are missing.

This is a detail of a mosaic I've been working on last year at the Mosaika Studios in Montreal. The project by the artist Kinuko Y. Craft was destinated to the World Prize Food Foundation (Des Moines, Iowa) and it represents two important scientists which won the Nobel Prize for their development of the cereal cultivation.
This detail shows a pendant and many of these smalti pieces are as big as pinheads.

This detail shows the dress of a man, the intention was to perfectly reproduce the texture of the fabric and we could make it after some attempts.

This project features two wooden panels 170 cm long and 30 cm wide, one black with white mosaic on it and one white with black pieces. The mosaic part is all made of river pebbles. You tell what you can see in it: clouds, spots, waves, skeletons... or simply complementarity between two parts.

I had the chance to work on a mosaic restoration for several month at the Memorial of Moses in Mount Nebo, Madaba, Jordan. Holding these worn tesserae in your hands knowing they are more than 1500 years old is something unforgettable.

The mosaic was first put down to number all the sections

After having scrubbed the old cement off, it's time to put the pieces back together

Cleaning up the surface before putting on the cloth which is going to hold the pieces together while we remove the old cement from back of the mosaic.

with these amazing surroundings, working in the dusty desert has been really rewarding

I do install mosaics, too. Sometimes, expecially when regarding public art, we have to install mosaics which are so wide that have to be divided into many smaller sections. When it comes to these dimensions, the installation could last more than a month.
I've installed mosaics in Italy, Jordan, Quèbec (Montreal), British Columbia (Richmond, Victoria), Ontario (Toronto) and New York.
I currently install mosaics in the United States and in Canada.