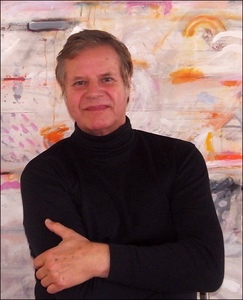 Born in Weimar in Germany.
Studied at the Kunst Academy Augsburg and graduated with Honours
and a Degree. He held numerous Solo and group Exhibitions since 1974.
He was excepted in the Archibald Prize with Garry McDonald in 1978 and
Thomas Kenneally in 1990. Represented in the National Portrait
Gallery Canberra with the Portrait of Thomas Kenneally and in numerous
private Collections in Australia, America, England and Germany.
Excepted many times in the Wynne Prize and in the Dobell Prize 2003 with a drawing of Prof. Peter Pinson.
In Germany he exhibited in the Grosse Kunst Ausstellung in Munich. Member of the AWI.

My paintings are contemporary “playgrounds – landscapes”
an inner experience of freedom not restricted by convention
or boundaries. My love in painting is to create from the inside
out and to express my passion.

“Playground in time and space” are my re-occurring themes.
Divided and separated by lines, images, symbols, forms
and shapes – composed like a sheet of music in the harmony
of a visual symphony – to reveal my inner world.

My canvases are often heavily textured, deeply scarred and
have the feeling of being sculptured.
Often I use found objects, architectural symbols or silkscreen
images or find it necessary to include written statements or
pieces of poetry to underline our human presence.

One of the most striking and intriguing elements of the new landscape
work being produced in Australia at the moment in the shift towards treating the canvas as the landscape rather than using it simply to represent or depict. In this way, the artist is re-cast as ' toiler the earth' as opposed to its renderer. In these works, the Australian landscape is reborn, not as a colonial outpost, surveyor's plot, picturesque sign of leisure/work, ownership, but as a conceptual and aesthetic "playground" for the artist's imagination.
Bernd is one such artist, whose work are, quintessentially, contemporary Australian landscape, with a look that is simultaneously haunted, scarred, entrancing, lucid and resonating.
The conceptual base of Bernd's work is highly esoteric. The sense of secrecy in the images is strong, with the landscape abstracted to the point where depth, focus and form are almost, obscured - and where the earth appears to harbour secrets and symbols which point outwards to realms beyond the canvas.
Bernd's works are both highly physical (in the complex and rigorous nature of their construction) and highly esoteric. The result is a body of work which makes a well grounded and stimulating contribution to an art historical genre and to "Contemporary Landscape" as a vital element of current international artistic practice.