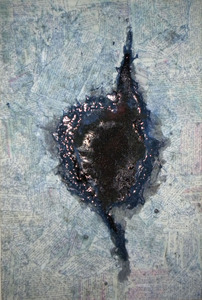 Born in Bagno a Ripoli, provence of Firenze the 15th of April 1983.
In 2002 she obtained a diploma at Liceo Artistico Statale Leon Battista Alberti of Firenze,in 2007 she was awarded with the highest marks the university qualification in visual Arts and performing arts –Sculpture (prof. Stefano Patti) at the Accademia delle Belle Arti di Firenze and in 2010 with a monographic graduation thesis about Francesco Messina and, with a final mark of 109/110, in visual Arts and performing arts – Painting (prof. Fabio Cresci) at the Libera Accademia di Belle Arti (L.A.B.A) of Firenze.
Works and lives in Via Brigate Partigiane n. 15, in Bagno a Ripoli, fraction of Antella.
Uses many languages, moving freely from the most conventional use of Sculpture to the Painting and to the different techniques on paper, among which in particular collage, to the use of virtual graphic programs on the computer, essential media.
In 2010, she showed interest especially in collage of virtual documents written on computer (which sees it again as a media) in her own hand, assembled on canvass with different kind of papers, dry leaves and flowers and see-through synthetic resin, without leaving out (any?) pigments, vegetable glue and special animal glue. The target is to try to represent through the images created with the writings thoughts, actual experiences experienced for real : memories turned into feelings.

She took part in the exhibition hall that has been held by the Accademia di Belle Arti of Firenze during the years 2005, 2006 and 2007 with two sculptures and with a work that had been prepared during the decoration course in 2007. During autumn 2006 she also took part in the 1st competition “Etichetta d’Autore – Festa dell’Uva di Impruneta” placing sixth with a wax work that was meant to hold the essence of the festival in itself, and the following year at the event “Arte in Piazza” that took place in Antella, presenting collages, etched engravings, drypoint engravings, ink and pencil sketches and multiple bronze sculptures, purchased in large part by private collectors.
2011
January
- (From 15 to 30) “Volant”, at Galleria Tannaz, in Florence.
March
- “Contemporary Languages” at AmArt Gallery, Bruxelles, Rue Dejonckerstraat, 34 (Goulet Louise).
April
– (From 16th to 28) “Salotto italiano dell’arte contemporanea” @Studio Logos (Via dei Fienaroli, 10), for the Celebration of 150th anniversary of Italian unification in Rome.
- (From 23 to 1st of May) “I Quattro elementi <Aria,acqua.Fuoco,terra>” at Castle of Saint Michele (Castello Estense), Ferrara.
May
- (14th to 15th) “IV Rassegna di M’ARTE SANA” at Villa Castelbarco (Vaprio d’Adda – Mi).
- From 14 to 29, the Esclusivamenteitaliano Gallery (Via dello Studio, 30 – Florence) was hosting her first personal exhibition, called “Tales from our seasons / Racconti dalle nostre stagioni”.
June
– (4 to 10) “Artisti Europei a Cremona”, at “Centro culturale città di Cremona” (Piazza Giovanni XXIII, Cremona).
- (18 to 19) “NonfermArti – 24 ore di insonnia creativa” @Complesso monumentale di Sant’Agostino, Cosenza.
- 26th @ Patronal festival of Vaprio d’Adda (Milano).
August
- (from 18 to 21) “Artisti Italiani - Variazioni”, in NY (MaMa Gallery, Chelsea fine Arts, Bldg Rogue Space - 6 East 1ST Street).
September
- (from 2 to 12) “L’Unità dell’Arte, l’Arte dell’Unità. Segni contemporanei del mutamento”, in Rome (Complesso dei Dioscuri del Quirinale – Teatro dei Dioscuri, Via Piacenza 1).
October
- (From 15th to 22) @Porto di Mare – Via Pisana 128, Firenze.
- (from 21 to 4th of November) second personal exhibition called “Incontro” at “Michelaccio – Via del Ponte di Mezzo 15r, Firenze”
November
- (From 12 to 23) “2011: il ritorno del nucleare”, @“La Pigna” Gallery (Via della Pigna 13a, Palazzo Pontificio Maffei Marescotti), Roma.
- (From 28 to 4 of December) “Fantasmagorica” @Forte Sangallo (Nettuno, Rome).
- From 18 to 31 of December “Network – From Turin to Chicago and Vice-Versa”, at 33Contemporary Gallery, Chicago (1029 W. Street – Chicago, IL).
December
- (From 10 to 20) “I Linguaggi dell’Arte” @Rocca Ariostesca (Castelnuovo di Garfagnana, Lucca)
- (From 21 to 31) “Caratteri Diversi” @Domus Talenti, Roma (Via Quattro Fontane, 113).
- (From 26 to 6th of January, 2012) @ArtTime Gallery, Udine.

In 2008, she cooperated for about a year, with the Gallery “Via Nuova Arte Contemporanea” in Florence with main duties of setting up the exhibition areas and above all cataloging and recording the objects d’art for sale and not for sale.
For a few months in 2010, she collaborated with “Galleria Tannaz”, in Via dell’Oche (Firenze), with the main duty of taking care of customers.