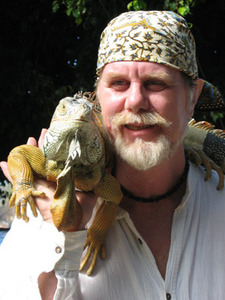 Leonard Filgate is best known for his whimsical and magical RIP SQUEAK® images and books which are loved and collected worldwide. A self-taught artist, he started out as a fine artist and was part of the San Francisco scene for many years. In 1997 he ventured into the world of children’s literature and has since received many honors and accolades, including the honor of being the featured illustrator for the 2003 Los Angeles Times Festival of Books. His books and characters have also been featured at the Boston Globe Book Festival, Hollywood Blockbuster Parade, and the White House Easter Egg Roll. Two of the children’s books he illustrated have been honored with Independent Publisher (IPPY) Awards. He had a major solo exhibition at The Delaware Art Museum in Wilmington, Delaware in 2005/2006. He is also included as one of the children’s book illustrators in an exhibition produced by Los Angeles’ Simon Wiesenthal Museum of Tolerance entitled “Every Picture Tells a Story,” described as “a celebration of diversity and tolerance as portrayed in illustrated children’s books”. From the Wiesenthal, the exhibition has travelled to the Bremen Museum in Atlanta, the Spertus Museum in Chicago, and the Indianapolis Children’s Museum.

Leonard’s work is in many private and public collections around the globe. His RIP SQUEAK® books have sold over 500,000 copies in six languages. In 2006, he became an artist member of the Society of Illustrators in New York City. He continues creating RIP SQUEAK® imagery and also works on other literary and fine art projects. His most recent series, the DRAGON SERIES, is a unique and whimsical further adventure into the world of fantasy art.

Leonard was born and raised in San Francisco and currently lives in Fresno, California’s Tower District.

You can find all Leonard’s work, fine art and illustration, at FilgateART.com

Leonard just started this new series in 2012. Inspired by his love of fantasy, music, poker, and all things whimsical. Leonard wanted to create something for "older kids" that would be a bit edgier than Rip Squeak, yet maintain that same spirit of fun and whimsy. His dragons are not your typical comic book/science-fiction dragons—they are playful and have almost human-like qualities that make us smile—always a goal in the art he creates.

Some of the dragons depict musicians, inspired both by the music Leonard listens to while painting (a lot of Miles Davis) and numerous musician friends. It turns out that Fresno, California (where Leonard lives) has a thriving and vibrant jazz community. Nearly every night of the week there is a venue in Fresno to go and listen to live jazz. The city even has added an evening once a month called Jazz Hop that coincides with Art Hop—that first Thursday you can find jazz everywhere.

This image is a part of the new Dragon series, begun in 2012. This image was the first of the musician dragons and was actually inspired by the name. The look with the hat is pure Gato Barbieri, the Argentine saxaphonist.

The trumpet player is a tribute to Miles Davis, "In a Silent Way". Miles was one of the greatest jazz musicians ever. His music, which Leonard often plays in his studio, had a hand in inspiring the musician dragons.

This image is a part of the new Dragon series, begun in 2012. The artist loves a friendly game of poker and plays nearly every Friday night. He'll never tell which of his friends the dragons represent, although none of his friends actually smoke cigars nor do they play with golden coins.

“Late for the Opera”

This image is a part of the new Dragon series, begun in 2012. The image was created in response to a dinner conversation that was inspired by a t-shirt with three Vespas on it which was worn by one of the guests. Leonard's wife suggested Leonard do a painting of a dragon on a Vespa. So he did! The speeding Vespa, the city lights, and the white scarf inspired Leonard's creative title.

The colors that predominate in the ancient murals and frescos of Pompeii inspired this painting, substituting musical dragons for the cherubs.