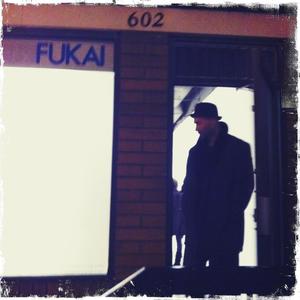 He is a University of Alberta graduate (1997 - Bachelor of Commerce with Distinction) and spent several years as a professional soccer player in Edmonton and Montreal before pursuing entrepreneurial interests in Canada and the United States. In 2000 he moved to Vancouver and received a Diploma of Classical Animation from the Vancouver Film School in 2001. He also began painting at this time.

Primarily self-taught, his painting has been strongly influenced by apprenticeships with both Gideon Flitt and Odd Nerdrum. His work has exhibited since 2002 and shown throughout North America and Europe.

His side-ventures include the founding of Red Hand Design, a Vancouver design company; Conceptual Design for Streamy and Leo nominated Riese the Series; the development of a book on perspective and composition for the visual arts; and illustration and authoring a storybook.

He has been teaching life-drawing, perspective, composition, and art history at Vancouver Film School since 2002, and teaching painting privately since 2003. He also currently holds independent lectures on the arts in alternating locations throughout Vancouver. Senetchko is also member of the figurative collective Phantoms in the Front Yard.

Jay Senetchko’s work may be viewed on the Phantoms in the Front Yard website: www.phantomsinthefrontyard.com, and on his personal website: www.senetchko.ca.

Once upon a time, painters in the Western visual art tradition could draw their subject matter from a rich, relatively stable and widely shared cache of mythological, religious and literary stories and figures. Alas, in a post-Christian, post-modern, post-historical secular world the challenge for painters now is to find something to paint that might be recognizable - or at least - meaningful to an audience.

While referencing history in a contemporary work of art risks alienating viewers, my intention and hope is that my paintings will provoke an inquisitive response.

Apologia uses elements of iconic visual and literary works of art to invoke a contemplative ‘old-world’ look and feel. Elements from various art historical moments, periods, individual painters, specific paintings and literary works, along with philosophies of art, are combined to express a mood, an attitude, an idea, or thought about the past. The series represents a sort of visual “defense” of the tradition that has inspired, saddened, outraged, bemused and otherwise nurtured me.

The series is just as much about the process of creating the final imagery as it is about the subject matter. Each painting begins as a sketch from my imagination and memory. Cobbling together pictures I find on the Internet to create a collage further develops the initial image. This collage then acts as a basis for a further sketch. Very often what I want to achieve will occur with the drawing at this stage and there will be no further evolution. For others, however, the sketch will become the basis for further studies from a live model that will, in turn, be used to develop a final painting.

These inanimate objects are symbolic monuments for moments of my experience. They are distillations of personal stories, conversations and things that I have read, seen and heard, and they are meant to act as metaphors for those events. Sometimes there is just one moment being symbolized, while other times the paintings are a conflation of events. The objects and their titles provide clues as to what their meaning might be, but they require a story constructed around them by the viewer in order to come to life.

These paintings may be enjoyed through their aesthetic alone: their solitude, simplicity, warmth and glow, and their straightforwardness. If enjoyed enough they may also entice the viewer to be curious about the story and history of the presented objects as they start to ‘speak’ and belie their simplicity. It is the depth of these objects in which their stillness acquires life.

I believe the best way to develop a relationship with these paintings is to view them as a visual diary of some of my thoughts. Relating to the desire to record thoughts is easy, and trying to ascertain what a person was attempting to say with their esoteric and subjective scribbling can be fun. That is what these paintings are meant to be: contemplative and enjoyable.