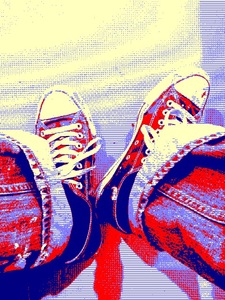 I was in born in Poland, during the years of political oppression, and though life was difficult, I tried to perceive the world thru eyes of compassion, poetry, literature and environment beauty There I attended the School for the Arts and Literature and continued in the New York Area where I received BFA in painting and later Masters in Landscape Architecture from the University of Pennsylvania. The idea behind my artistic pursuit was to create world of beauty thru art of painting and environmental design. Each form, each artistic creation was meant to increase our awareness life, further expressing immeasurable moods.

M artistic direction began to take shape after integrating Eastern spirituality into my artworks. My paintings overtime began to suggest by the simplest possible means the inherent nature of the aesthetic object. In my work, I try to suggest the essence and evoke idea of Cosmo-centricity where men and art are an integral part of nature.

My artistic philosophy lead me to resumed my studies at the California Institute of Integral Studies in San Francisco where I received, in 2011, Masters in Integral Psychology and Certification in Expressive Art Therapy. Art has become not only a medium of communication but also a way to heal and inspire.

Living in the Bay Area since 1994, I have a broad creative practice. Many private collectors throughout The United States have acquired my work and my paintings are exhibited and represented in LA, SF Bay Area, Chicago, Dallas, New York, Paris, London and Hong Kong.

EQ Series and Still Water Series are based on Buddhist philosophy and works with an intention of equanimity that is neither a thought nor an emotion. These works of art express immeasurable mood through the use of color and composition. In Buddhism, equanimity (upekkh?, upek?h?) is one of the four immeasurables and is considered the steady conscious realization of reality's transience. While some may think of equanimity as dry neutrality or cool aloofness, mature equanimity produces a radiance and warmth of being.