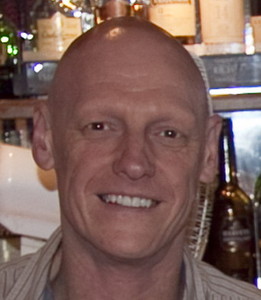 I was born and brought up in Shirebrook, a tough coal mining village in Derbyshire UK in the 1950’s and 60’s and developed a love of painting and drawing from an early age, as soon as I could grasp a brush or pencil in fact. Producing images has been as natural to me as breathing.
After University in Birmingham,UK from 1973-76 I joined the fire & rescue service... a career I completed 30+ yrs later in 2007.
A means of escapism in childhood art has since been a passion I've carried with me ever since, throughout the 1970’s as an undergraduate and into adult life in the emergency services.
I only turned fully to painting from 2008 after I left the fire service and found time to devote to it.
About my art
Now I have much more time to paint I'm loving it. There is a feeling of immediacy, of life, of connectedness, with painting that I don't get from anything else..... anything at all. So I have to paint. My only regret is that I have neglected it for so long.

I am principally inspired by colour, and light & atmosphere. I paint mainly in oils because I love the texture of the stuff. But I do experiment with other media..... I never like to do the same thing twice so I don't really do "themes". The subject for me is mainly just a carrier for some effect I'm trying to achieve at the time, though I do have a pretty eclectic kind of approach to subject matter.

But what I paint has to move me. I need to be in thrall to it in some way. Exactly how that is I often don't know myself, but I always become aware of it as I'm working away.... and I'm all done when the feeling has worked itself out. It's a bit like being picked up and then gently put down again by something beyond my control ...but all the time feeling I’m on a dangerous edge.

Above all what I get out of art is a kind of endless, compulsive challenge. When I get up from painting I feel an immediate compulsion to get straight back to it again. I take that as a healthy sign and I will always paint while I feel that way.

I have always felt that a piece of the artist goes into everything he/she creates, so I endeavour to make each artwork absolutely unique. Like most artists, I suspect in their heart of hearts, I don't paint primarily to sell, so prices for my work are always negotiable. My goal isn't really to sell art at all, although I am extremely happy when someone wants to acquire a piece. My greatest hope is that my art will "touch" them personally.

I still want to exhibit my work......but it's not why I paint, it never was. Painting for me just calms the soul. It's my private world.
Education
Although I am a self taught artist with no formal training beyond school I have painted all my adult life. I still consider myself a student practicing my art, probably I always will.

In 2010 I was shortlisted for the Art of Giving, National Art Competition at the Saatchi Gallery, London.

I consider myself to be a modern traditionalist painter. I don’t have any favourite subject matter, instead my imagination is fired by a certain indefinable quality in everyday things, often linked to a memory from the past. Sometimes just part of a remembered image-even something simple like the sunlight playing on a hat brim-is all it takes. There is a kind of beauty inside everything if you look close enough – it doesn’t have to be anything intrinsically pretty, or attractive or especially worthy of attention. In my experience quite often it is better if it isn’t.

Venice is timeless in the early hours... pure, thin, ethereal light shimmers on the water, light as yet unadulterated by the day, unsullied by the passage of time.

“Waterwell and stairs at the Palazzo Centani, Venezia”

this atmospheric inner courtyard space tucked away in a backstreet in Dorsoduro is a window into another world. The kind of compelling inner space suggesting a history in which anything could have happened, and probably did.

“Ducks on the beach”

A child expresses great delight when confronted with something which shouldn't be.

“Me, Antony Gormley and another on Crosby beach”

The artist communing with an A.G. lookalike.

An iconic female figure for everyman. She may well exist in the minds of all men.

One of a series depicting the seven deadly sins in a contemporary context. This image of envy is inspired by a chance juxtaposition of greenery, brickwork and light in a small enclosed urban space... as viewed thro’ fragmented glass. The warped perception of envy and the blighted, moribund outlook of individual morality in a city which seems more and more to exist only for the tourist.

A tribute to the unsung heroes of our industrial past. This image was inspired by the sudden closure of one of our great local engineering groups Butterley Company which dated back to 1797 and produced, amongst other things, the enormous arches forming St Pancras Station, London.

An image exploring that claustrophobic feeling of the dog days of summer. Everything swelters, nothing moves and the sun seems to devour the entire sky.

Just a perfect pose from a practised life drawing model. Thanks Louise!

This image is painted almost entirely in black and white which gives it an almost cinematographic quality and emphasises the solitary nature of the single bird in the centre panel of the triptych.

No description necessary. This image has been pared back to the essentials to give extra prominence to the colours on display on occasions like these.

A commissioned piece of a stunning Australian sunset viewed over the creek of the title in the Sydney suburb of Cremorne.

One of a series of contemporary takes on the Seven deadly sins theme - this one inspired by the street riots of 2011 in London and other major UK cities. Anger in this context is a focusless group response which is nothing but disfiguring and destructive for the individual caught up in the violence.

This work has been shortlisted for two art awards so far this year. In Mar 2012 for the Saatchi Online Showdown award, and in Sept 2012 currently in the final shortlist for the National Open Art Competition in Chichester.

Child staring in innocent wonderment at some street fountains in central Liverpool, UK

The future of mankind rests in his own hands.

Child refugees arrive in Benghazi during the Libyan uprising 2012.

Children frolic around a series of fountains in the Summertime