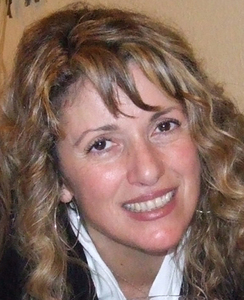 Rossella Baldecchi, Pistoia artist, studied at the Art Institute "Petrocchi" and in 1983 graduated in painting at the Academy of Fine Arts in Florence with honors.
The experience within the Academy has been highly educational as well as in painting in the engraving, which was dedicated with great interest, especially the deepening technique.
1983 is the year of the first major exhibition. She was invited to show in the international exhibition "Exhibition of young artistic presence in Tuscany" at the GAM in Forte dei Marmi, on selection of a panel of Italian and foreign critics, edited by A. Del Guercio, In 'Summer of 1984 Rossella was again called in the same exibition.
The first solo exhibition was in1985 when, at the invitation of the Pistoia office of Tourism, in the ancient "Palazzo dei Vescovi". Since then she has begun an intense artistic activity by participating in numerous exhibitions and festivals and she has received important awards for both painting and graphics.
In 1987 she began teaching at the Art Institute of Pistoia, where she now teach art of Design.
In 2002 she made the paintings "Vento di Pace" whose lithographs have since been delivered each year by the "Centro Studi Donati" of Pistoia in recognition of their commitment to peace at national and international dignitaries attended the various editions of the Day Peace, Culture and Solidarity.
For several years he engaged in the "Painted Words"( " Parole dipinte" ) which has resulted in an exhibition, which includes the works of last years. The exhibition, which has become itinerant, is presented by the curator Maurizio Tuci and art critic Siliano Simoncini.
In the exhibition "painted words" individual paintings, oil paintings, are flanked by panels with phrases, poems and messages that speak of peace and solidarity, environment and reflection on social issues and interiors that are a small but significant summary thinking of famous people from different cultures who have worked in the fields of philosophy, literature, politics and religions at different times and have been an inspiration and nourishment for the paintings made.
In October 2007 the solo exhibition was in Florence in the" Palagio di parte Guelfa" under the auspices of the City and the Province of Florence and was presented by the Head of Culture Eugenio Giani.
In October 2008, enriched with new works, the solo exhibition arrived in the city of Lucca, Villa Bottini where it was presented by the Head of Culture Letizia Bandoni and in November 2008, presented the Councillor Guja Guidi, the solo exhibition was in the "Museo del Palazzo del Podesta". In 2008 she exhibited in the exposition of visual arts of the World Day of Disarmament in the Kapiolani Community College University of Hawaii and has been present in art shows in Milan and Naples.
From November 2008 to April 2009, Rossella hold an solo exhibition of graphic arts at "Plus Florence space"in Florence, curated by Carlo Franza.
In June 2009 she won the National Award "Sergio Agosti" in Santhia, Vercelli.
From November 2009 to January 2010 the municipality of Pistoia has showed the last works of Rossella in a major solo exhibition at the "Museo Marino Marini" in Pistoia presented by the Mayor Renzo Berti.
In February 2010 she participated, by invitation, the event "Immaginearte" in the Fortezza da Basso Pitti Immagine in Florence, then set up also in the Museo Marino Marini in Pistoia. In March 2010 she exhibited in the Basilica of SS Annunziata in Florence.
In September 2010 he represented his city with a solo exhibition of painting and graphic arts in Germany Reutlinger (Stuttgart), promoted by the city of Pistoia and the Municipality of the German city, by Siliano Simoncini and edited by Thomas Becker of the University of Reutlingen.
From November to December 2010 is a solo exhibition of painting at the Lyceum Club International in Florence and, in the month of December, with a staff in 'the auditorium of ViBanca Pontelungo, Pistoia.
Since spring 2011 "Parole dipinte" is supported by a new project " Haiku of Spring "in which the works are inspired by the famous Japanese haiku poems. The last solo exhibition in Pistoia and Lucca have been dedicated to Japanese people and the exhibition has been awarded with the distinguished patronage of the Embassy of Japan for its high artistic value. His works are in public and private collections in Italy and abroad.