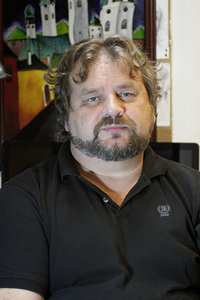 Born in Uzhorod, Ukraine in 1960, Joseph Coban moved with his family to Czechoslovakia in 1972. Then, in 1999 he moved to Ottawa with his own family. A graduate of three colleges in the Czech Republic, he studied art history, technology, and design. Joseph updated his education in 2002 at the International Academy of Design and Technology in Ottawa. After years of working for companies in different fields, Joseph decided to try working on his own and is now working on many projects and commissions, which involve a variety of aspects to create works of art.

Over the years his painting style and techniques have developed and broadened. Joseph’s favorite style is realism and portraiture, as well as that of old masters’ paintings as they have stories and hidden messages to tell. From one day to the next, Joseph is able to switch to completely different subjects and styles. He says, “Life would be very boring if one does only one thing over again and again”.

“Enigma of the Pyramid”

“Landscape with Two Suns and OFO”

“Reflection of the Empire State Building”

“Window to another Dimension”

“Feathers of the Phoenix”

Over the past three years I am working continuously on this project. All of these people are real. I found that people in Canada do not know where is Morrisburg, but Morrisburg has description as Upper Canada Village.

“Another Chair from Morrisburg”

Portraits of my family members or commissioned ones.