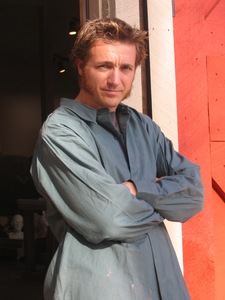 Emmy and Academy Award winning sculptor Wesley Wofford works from his private studio in the National Forest of North Carolina. Wofford Sculpture Studio LLC, a 2,300 sq. ft. facility, is nestled with his home on a mountaintop in Cashiers. The studio is always filled with sculptures at various stages of completion, the large commissions occupying the same space as the portraits, commissions, gallery pieces, and maquette studies for submissions.  While he is in the studio, he is submerged in the work and it all speaks and informs both him and one another.  He continuously participates in both indoor and outdoor exhibitions throughout the country and also helped form a sculpture park in which he is the curator of a permanent collection and three biennial invitational exhibitions.  In 2011 he became an elected member of The National Sculpture Society, the oldest sculpture organization in the United States. Wesley's fine art sculpture has begun to be recognized on a national and international level with various awards and publications celebrating and featuring his work.

Wesley is originally from a small rural southern town in Georgia and displayed an artistic talent at an early age. Upon graduating high school he entered the Valdosta State University BFA Program on a competitive art scholarship. After several years of study at VSU, Wesley began to feel frustrated with his college direction and decided to leave with his Associate Degree and head for Hollywood, California. Infatuated with hyperrealism, Wesley pursued work in the motion picture industry creating realistic people, characters, and animals. His obsession with advanced translucent silicones led him to develop his own formulas and techniques, which in turn catapulted him to the forefront of the makeup effects industry. Wesley has worked on over 75 motion pictures and television shows. His credits include A Beautiful Mind, Hannibal, Batman and Robin, The Rock, and Collateral. He has personally worked with such actors as Robert Deniro, Tom Cruise, Robin Williams, Julia Roberts, Will Smith, Chow Yun-Fat, and Russell Crowe. He has been featured in numerous magazine articles and television coverage and has received many awards, including an Emmy from the Academy of Television Arts and Sciences as well as an Academy Award.

In 2002, Wesley became dissatisfied with the medium of film and moved to the mountains of North Carolina with his wife and two children to pursue Fine Art Sculpture full time. He still works on the occasional film to "keep a fresh perspective on both his sculpture and his psyche", but spends most of his time completing both public and private commissions as well as pursuing his own compositions.

“Beneath the Surface” (coming soon)
Solo Exhibition
The Bascom: Highlands, NC
May 24-August 17, 2014

Cashiers Chronicle- August 28, 2013
“See Balestiere sculpture in the making on Labor Day at the Village Green”
Story by: Kelly Donaldson

Sculpture Review-Fall 2009
“To the Movies and Back: A Sculptor’s Education”
Story by Jodie A. Shull

Academy of Motion Picture Arts and Sciences-2005
Technical Achievement Award
For the development of a special modified silicone material for makeup appliances used in motion pictures.

Academy of Television Arts and Sciences-2004-2005
Primetime Emmy Awards
Outstanding Prosthetic Makeup for a Series, Mini-Series, Movie or a Special
“The Life and Death of Peter Sellers”- HBO
Geoffrey Rush Prosthetics Designed and Applied By

“This sculpture is an exploration of the beauty of the feminine form. It alludes to my development as an artist, the title implying a waking up or stirring-as in the direction of my work-but is also a play on words to implicate a sexual arousal. It is also a companion piece to “reawakening” that speaks of the duality of man and woman."

“This composition represents my waking up to the world of figurative sculpture. For over 13 years I had worked in the film industry, and was struggling to find a direction for my personal work. The sculpture is a metaphor for me finding the path, and is an exploration of a modern voice for the human form. The monumental edition represents the heroic size I see many of my compositions. It is also the origin of my “timestamp” concepts of how the same sculpture presented with two different finishes can alter the viewer’s perception of when it was created.”

“This sculpture is about the union of man and woman, two becoming one. The two figures are separate but as you move down the piece, they are slowing becoming one. This union is inspired by passion and fueled by sexual desires. For me it also speaks of the correlation of art and sex drive, as viewed by many great artists of the past from Rodin to Victor Hugo.”

“This piece is about me finding my inspiration, and nurturing and embracing it. Her finger touching my arm is my Muse channeling my work into my left arm-the creative side-to be filtered through me and imbued in the clay. She is indifferent to my daily search and adoration for her.”

“This piece speaks of the so labeled American generation of people and how during the course of their lives smart phones and computers have become intrinsic to society.  The abstracted figure is embracing a device, oversized in scale, to emphasize how much it capitalizes his existence.  Despite his intense focus on the device, which is supposed to give him pleasure, he still feels empty and hollow, acknowledged by the void in his midsection.  The de-emphasized ears imply he hears nothing else, and is ignoring the larger world around him as it passes him by.  The red color is aimed at getting the attention of those same viewers that are becoming acclimated to shock art.  Then of course there is the larger silhouette of the X”.