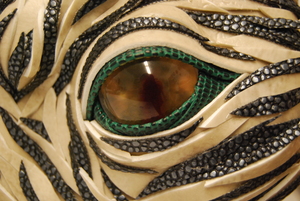 HuNoo(Heon Woo Nam) was born on May 29th, 1983 in Korea. He is a sculptor who works with plastic vinyl as a material. Since he was a child, he liked to draw pictures or even comics with his imagination. From that time, he decided to be an artist. Also, He was curious about three dimensional whenever he drew a picture. He entered the University of Seoul to study about sculpture. His concept of “infection” inspired by his experience that his father was a doctor. He worked every single day. He participated in many group exhibitions and had a solo exhibition. However, he was never satisfied with what he had got. After he graduated his university, he decided to study abroad to New York. He wanted to know about modern art deeply. Recently, He entered LIU Post with M.F.A student program. He is trying to develop to his work. Nowadays, instead of 'Infection' series, he made his new series “Artificial Myth” and “The eye”. These are series about "imagination". And then he is focusing on standing exactly idea of his work.