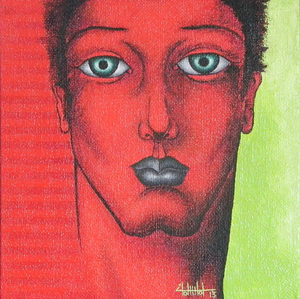 Mohamed Elmoslemany
Born (1973) in Egypt, he had studied at the faculty of art education. Then- he had been graduated on- 1997 with grade very good- with honors degree- (the first place among his session), then he took the job of assistant professor at the department of decorative designs at this faculty, and he obtained the master degree on- 2003 and the doctorate on- 2009 in the philosophy of art education, Mohamed is working as Associate Professor of decorative designs at the faculty of art education- Helwan university.
there had been many influences in his life and particularly the nature of Egypt countryside- and the special social context of rural societies full of visual influence that had enriched the visual expression in his works and in dramatic compositions where he used the Acrylic color-oil color- watercolors- inks, and pencils along with the other influences from the treatment of colors or the treatment of paper surface.
Then he had used the oil and acrylic colors and the variety of materials, he managed to deduce the compound forms used in water colors in order to treat the different expressions of Egyptian faces with the potentials of oil and acrylic colors with his simple style in portraits in order to convey many meanings and glimmer colorful compositions which are distinguished with color resolution that express the brilliant faces in Egypt
and through visual plastic sentence about the contents of Egyptian reality and which is very special through the long human history and which distinguishes its civilization in the ancient world, as it is still in its villages, streets and tows that express the patrimony of all these years, with its simplicity and complication that makes it a source to the visual arts, and which is the search of elmoslemany in the Egyptian faces which are the source of his inspiration.

Exhibitions:
Private Ones
2011 exposition at (art corner) Zamalek.
2010 exposition at (art corner) Zamalek.
2000 exposition (for the design of jewels at the Egyptian French company for hotels).
1999 exposition at samara fair – Zamalek.
1999 exposition at Cairo atelier (Mohamed Nagy Hall).
group ones:
2013 exposition Biennale Sharm El-Sheikh International first.
2011 collective exposition at down town building – new Cairo.
2011 Collective fair (art corner) Zamalek.
2010 Collective fair (art corner) Zamalek.
1999-2009 participation in fairs of teaching staff- Helwan University.
2000-2004 fair of small works.
2005 Collective fair at the French cultural enter at port said.
2001 fair of designers and manufactures of jewels at Cairo Sheraton hotel under the aegis of the council of world gold.
1998-2001 exposition of avant garde – at the society of lovers of fine arts.
1999 scholarship of creativity at Luxor ateliers 1999.
1998 collective exposition at Horus hall
1998 collective exposition at Horus hall (line and space in design).
1996 exposition of the artist Gazebia Serry contest.
The collections
He had many collections at private individuals in Egypt France and America.
He had collections at lake view hotel at the fifth agglomeration at new Cairo the rewards:
The rewards
1- 2013 Special Jury Prize Biennale Sharm El-Sheikh International first.
2- 2006 Certificate of merit from the high council of antiques (festival of little golden pharos).
3- 2003 First reward in sculpture (Kamal Ebeid contest in sculpture).
4- 2003 Two certificates of merit from the center of world gold for the final eliminations at the contest of creativity for golden designs (Jewellery Design).
5- 1998 Fourth reward for drawing with water colors (Kamel El Ghandor contest).
6- 1998 Reward of the society of artists writers and media presentators of Giza for scholar Excel.
7- 1998 The first award (gabakhangy) for (the first place among his session).