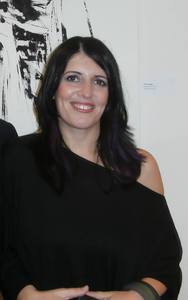 Erika Marchi, Italian painter born in' 73, starts at a very young age to express her feelings on the canvases, where all inner silences have the faculty to be expressed, where only an attentive eye can scrutinize what is not seen. He lives and works in Carpi (MO).
The technique is learned in the studio of a Milanese painter, but the artistic training takes place thanks to the work he does for the great Italian brands of clothing such as Dolce & Gabbana, Extè and Ferrè.
Erika Marchi's work has been described as innovative and tastefully refined, an art that becomes revelation from another dimension to another situation, something that within a mental space reveals itself to others and communicates to others.
His works are oils developed on canvas or on paper in which the colours of black and white dominate and are interrupted by small, generally red strokes.
The most figurative are called "Tangles" as if they were skeins of wire that form figures whose red dot represents a hypothetical wax that blocks the last thread. These works are executed with precision and often convey feelings such as love for the family, music and art, but also more iconic figures.
The most abstract are called "Labyrinths" because playing on the shadows of black hides spaces and figures that come out as the works are observed. They are more instinctive works, focused on the sense of sign that is often used as a means of transmitting important messages.
In Italy he has exhibited in cities such as Rome, Milan, Venice, Bologna, Turin, Florence, Bergamo; he has participated among other things in the ninth Biennale of Florence in 2013, competing with artists of the depth of Anish Kapoor. Fairs include Art Expo New York and Arte Genova. She was part of projects such as the "North-East Route" at the Ugo Carà Museum in Muggia (TS), The Labyrinth of the Hypnotist at the Palazzo Gallio on Lake Como, and was an artist of EXPO 2015 in Milan at the Palazzo dei Giureconsulti and at the Expo Gate; he also exhibited in Rome at the Basilica dei Santi Quattro Coronati in the project "Eternità dell' Arte e le Expo Gate". Her personal exhibitions are very successful.
She has exhibited abroad at fairs and galleries in New York (Manhattan), Providence (RI) USA, Dubrovnik (Croatia); London is an important city for her and has already been a guest of several galleries and events...
Many of his works are now part of private collections; various publications of his works are published on Mondadori Catalogues, EA Editore, catalogues and magazines in the sector.
The 2017 exhibition, presented at the Jelmoni Gallery in Piacenza, entitled Human Labyrinth in which human figures and mental projections emerge, has been then exposed in Sabaudia Pinacoteca and Isernia’s Cent8anta Gallery.

Capsule Black & White. In the new collection you 'll find minimalism pieces in black and white with red touches. Few informal elegant and stylish strokes on white canvas that catch the observer eyes.