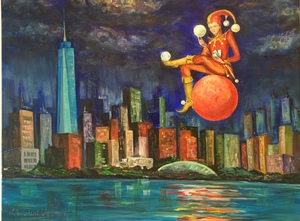 Liubov Brizhatiuk
Born in Kiev, Ukraine, Liubov is a fine art sculptor and painter specializing in Impressionism, Surrealism and Expressionism. As a child, she sculpted in the studio of her father, the illustrious Ukranian sculptor Viacheslav Brizhatiuk, but her real love is painting. Starting at age 13 she participated in the Ukranian National Art Concourses. Liubov’s paintings represented the Soviet Union in the International Art Exposition in Czechoslovakia and Japan. At age 16, she left home to study painting at the renowned Kharkov State Academy of Arts and Design in Ukraine where she was enrolled in the gifted child program. She celebrated her 20th birthday with her first professional appointment at the Union Artists Guild of Ukraine in their Design Department. In just three short years she advanced from Decorator/Design Creator to Project Manager.
In 1984 Liubov married a foreign student from Colombia, South America and one year later they relocated to Bogota, Colombia. Being unknown in Colombia, she had to start from the bottom. Her challenge was learning to speak Spanish while taking care of her two young children, and to do so while continuing her painting career. Liubov’s spirit and love of painting led to her and a group of other artists in creating the Artists Union of Bogotá. Working with local politicians, they won a contract decorating and designing the Plastic’s Art in Suba Borough Hall and later managed several large art projects for the city. The tragic untimely death of Luba’s husband forced her and her two teenage children to quickly relocate to the United States..
In the United States since 2000, Liubov has worked in the Home Health Care Services industry where she started as a Staff Coordinator and advanced to Project Manager. She dedicated most of her free time to landscape painting. In 2006 with a stable job and grown children, she thought she can finally start to enjoy the life, travel, paint and live her dreams. However, destiny once more stabbed her in the back when she was diagnosed with breast cancer. Now, few years later, as a cancer survivor, she lives by this philosophy: “I want to tell to everybody if life gives me second opportunity to live, I will always have a paint brush in my hand, this is my true vocation and happiness.”

- sold her paintings to private collections in France, Switzerland, Belgium, China, Bolivia, Peru, Venezuela and the United States
- Represented plastic art in the Union of Artists of Bogotá. and was an initiator of this Union
- worked on many different art projects sponsored by the city of Bogotá and performed by the Union of Artists (Union of Artists became ‘Art Administration of Colombia-1998)
- Organizes many Art Expositions in the City Hall of Bogotá.

Note: The first three achievements were counted for advancement from Decorator and
Design Creator to Project Manager in Art Design.

“Joker in the city ”