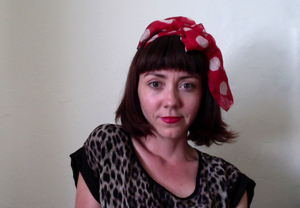 Leila Morrissey is an art photographer,but has also spent time as a commercial photographer working for magazines and record companies in Australia,India and NYC.
After graduating from Melbourne's RMIT University in 2006.She then travelled to India where she worked as a photo editor for "Rave" a well known music magazine published in Bangalore.From there she returned to Australia and worked for various publications and record companies shooting portraits, fashion and live music, as well as commissions.
In 2009 she had her first solo show titled "Circus" based on the alternative circus community in Australia. Soon after she decided to move to NY as an artist, where Leila participated in many group shows, and had commissioned work from magazines (Ladygunn, Williamsburg Fashion weekend, Street press Australia, J Mag, NME, The Big Issue, and Frankie Magazine) and created a second solo exhibition "Death and Beauty" in Brooklyn in 2012.
In 2013 Leila spent time in Berlin, working on a photo series of abandoned buildings, and participating in group shows in Berlin, Portugal and Australia.
In September 2014 Leila had the fantastic opportunity to do a month long residency at “Listhus” in the far northwest of Iceland, for which she had funding through the Ian Potter Cultural Trust Grant, with this she was also able to go to NY and study the Cyanotype alternative printing process that will then be utilised for an exhibition of the work in late 2015-6.