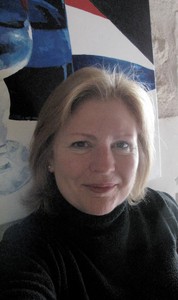 Born in Kenilworth, England, Helene worked in Graphic art and marketing near London in the 1970's before moving to South Wales to concentrate on portraits and the wild landscapes of the region.
Moving to South West France in 1992 she has exhibited in international salons in Normandy, St Petersburg, Krakow, Warsaw, Italy and has had solo exhibitions in galleries in South West France and Paris. She works in acrylic, pastel and watercolour.