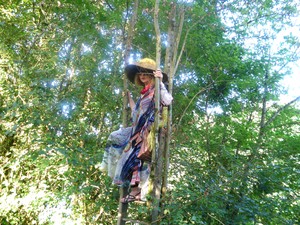 Ludwika Ogorzelec received her Master of Arts Degree in Sculpture from the Academy of Fine Arts in Wroclaw, Poland in 1983. In 1985 she move to Paris to pursue more artistic training. There she was invited to work with Cesar at his studio at L’Ecole Nationalle des Beaux-Arts advancing her “Instruments of equilibrium” cycle based on an original series she created in Poland. Due in part to critical acclaim she received from Michael Brenson’s review in the New York Times(1991), her work was increasingly well received internationally. Her sculpture was exhibited in New York, Sweden, Greece, France, Germany, Belgium, Switzerland, Austria, Italy, Scotland, Spain, Andorra, Poland, Lebanon, Japan, Costa Rica, Australia, Latvia and Canada. To date she has been exhibited in 60 solo and over 50 curated group shows. She has also been selected to participate in 16 symposia and residency programs in many distinct parts of the world. In addition, her work is currently installed in 10 public collections. She was awarded a Polock-Krasner Grant, from the Conseil National de Monte Carlo Prix. In 2007 she was recognized for her work (1980-89) in Solidarity with Poland’s National Medal of Honor (Krzyz Oficerski Orderu Odrodzenia Polski) by the President of Poland. Her shows have been reviewed in over 100 articles in many international periodicals, and she has been selected as an artist of distinction in a compendium of Polish contemporary artists entitled, “50 Polish artists” by Elzbieta Dzikowska inpoland, an art history book entitled, “La sculpture modern” by Itzhak Goldberg, an edited volume by Francoise Monnin in collaboration with Pompidou Centre in Paris, and a book entitled, Bi,Sozo e "(Creation of Beauty for Japanese High Schools) by Koji Kinutani.
During the last 25 years she has been pulling her “creative line” across the world, where she captures and entangles her audiences through her ongoing international project known as “Space Crystallization.”