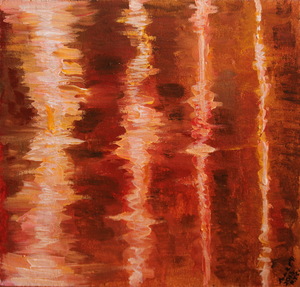 Born in 1986 in Leningrad (now St. Petersburg), father - Rakhmatulin Fitrat Nazhibovich - a hereditary military, mother - Rabkovskaya Nadezhda V. - worked as a lawyer in the military court. In 1988, his father transferred to serve in the city of Lenin (now Cosmodrome Baykonur) in Kazakhstan (then part of the USSR), a poor in nature but rich with sunshine desert - the largest launch pad space ships in the territory of the Soviet Union, and perhaps the world. Even before the start of school Grandmother sent from Moscow large sketch pad, filled quickly with children's drawings of launch rockets and images of military people. In 1993, after the collapse of the Soviet Union's father transferred to serve in a small military town Golitsyno-2 (now Krasnoznamensk). Roman was in the third grade of elementary school, and a year later, mother took me to the children's art studio "Perspective", where there was only one but a very good teacher Natalya Vladimirovna. As for the painting, then it was time to paint the ordinary children's drawings, kind of comics about Ninja Turtles, or engage in school newspapers. Mother was for the education in arts , while the father insisted on sports education. 2001 graduated from high school and went to Architectural College where found new friends, but painting and drawing were taught there only in a very narrow traditional manner. The road from home to college took 4 hours a day, but in 2003 the family moved to Moscow that made learning much more comfortable. His first job: assistant architect and interior designer began in college. Most of the projects in the school and in the work done in AutoCAD applications and 3d max. In 2004 finished architectural college and entered the Institute of Architecture at the evening department, where he studied to be honest not very thoroughly because a lot of time devoted to work, a private practice in interior design and architecture. In 2009 graduated from MARCHI (Moscow Institute of Architecture). Design projects undertaken by private apartments, houses, shops, offices. In 2011, taking a dog from a shelter, give the name of "Blackie" which later appears in many paintings, like the blue dog, like a fairy tale Maurice Maeterlinck (The Blue Bird), where the usual bird is able to give happiness, but children see her blue and can not catch (of course there was a dog in the fairy tale ).In the 2011-2013 year he began to paint a lot and created a lot of cityscapes and landscapes of Russian nature, portraits of friends and family, such as a series of 12 McDonald's and Indian impressions, paintings on any subject, and finally came in February 2013 in NY, the capital of modern Art, creating a series of blue dog in New York, as an attempt to express a jumble of impressions from the huge piles of the city through the lens of a blue dog and love it because Blue dog loves all.

Much of approach to creativity is described in the biography. You can add a mark that provide new places that can be visited in my life, whether it's a field of dried Indian village(The Indian experience) or a dense metropolis(Blue dog in New York, 12 McDonald's in Moscow), Rocks of the Black Sea coast (Anna and the blue dog). When you transfer you something on the canvas, you can not love it, you may like or do not like your picture as a result, but in the process can not feel negative emotions to an object image, only love.