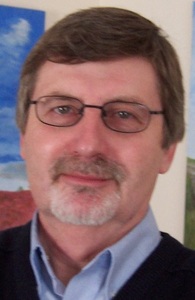 I live in North Staffordshire and I like to think that I am an enthusiastic artist.

Proto Realism is just one of my styles, but I have to say that for some unknown reason, I do feel 'drawn' if you will excuse the 'pun' to this style.

Art is a personal thing to the viewer and the buyer. Art is for all to enjoy. Art is a project that never ends and I love it.

You can also find me on facebook under ART IN EVANS

Constructive comments are welcome. All work is for sale.

Proto Realism, a term given to me by an Art Gallery in Stoke-on-Trent. A unique view on realism itself.

My work has been called idiosyncratic, whimsical, even childlike. We could just settle on quirky. Others have said that it has a 'Lowry' feel to it.

I'll leave you all to judge for yourself.

Born in the Potteries,
One of Life's lotteries,
He is from the 'Mother Town',
He is indeed one of our own.

Famous for his songs and 'Take That',
Famous for UFO's and his capped hat.
At one with his Angel and his voice,
Robbie Williams does what he wants by choice.

Liverpudlia, but not by name
A City renowned for Beatles fame,
A City that resides by the River Mersey,
Red and Blue fans wear the jersey.

Now a European City of Culture,
Beating a path to a successful future.
In times gone past, many ships would dock
Unloading food, goods, coal and flock.

Now Art and Tate are to the fore.
To replace with tourism, hard times of yore.
The Liver Bird has witnessed many a name
But non more famous than Penny Lane.

NOW AND THEN success is great.
Entrepreneurs are awaiting at the gate.
Goods are manufactured and transported,
Factories are heaving they have to be exported.

Canals replace the rough old roads,
Many less breakages and much bigger loads.
Viaducts and Aquaducts become the norm,
No mud no ruts despite the storm.

Railways are built for extra speed,
Factories at full tilt to cater for need.
Prosperity and success is on the up,
Thanks to lace silk cloth and pottery cup.

A downward spiral begins to occur,
Cheaper goods are now made elsewhere.
Jobs are lost as our factories close,
Not a situation that we would have chose !

Diversification has to be the way,
Leisure pursuits tourism come what may.
People are employed in a different role,
It has to be better than being on the dole.

Goods more and more are now imported,
From factories abroad that we have sorted.
Jobs are scarce over here now you see,
Just what does the future hold for you and me ?

The Trawler comes in to unload its Lot, One Old Lobster escapes to avoid the Pot. It's not yet ready to be on the boil, It prefers to be on Terra Firma and Soil. A Seagull watches all that's around, It seems to stare and listen for sound. Despite the Fisherman's activity it will not flinch, It will not budge, it will not move and inch. Everything is still, the harbour is calm, It's a beautiful spot, no hint of alarm. But not to the Lobster who trys to get away, Who intends to live and fight another day.