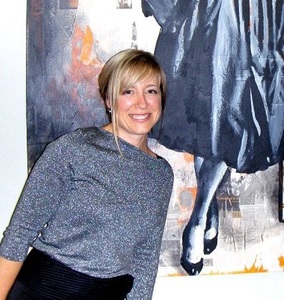 "My artwork explores ideas of feminine identity construction. Having grown up in a family of seamstresses and grade-school teachers, my mixed-media paintings on fabric and collaged paper, reference the age-old practice of dressmaking as well as historical narratives that depict women in a state of alteration. The work investigates and plays upon the ironies of how we invent ourselves within the context of history and culture."

A native to central California, Batty currently resides in Clovis with her husband and two children and works from her studio at Corridor 2122 in downtown Fresno.

This project begins an exploration of the ways in which cultural systems seek to construct our ideas of identity and sexuality, addressing the ironies of how we create/invent ourselves within the context of our society, history, and culture. These representations come from my own questions regarding the feminine subject as a signifier, an object of desire and commodity, as well as a source of creativity and self-invention.

Informed and inspired by memories of sewing with the women in my family, these paintings portray various stages of creating, fitting and wearing sewing pattern dresses. The materials and stages of this process act as a metaphor, addressing the tension between seemingly irreconcilable structures of the Self: The feminine Subject and the feminine Object. Here, she is seen as both the Artist in the act of creating herself, and as the faceless body of Woman.

“Grid Lines: Locating Ourselves in Space”

This project reconsiders issues of feminine identity construction in light of my own recent diagnosis and recovery from breast cancer. As with previous work, ideas are explored by use of instructional sewing imagery and language from an era in western society when women primarily made their own clothing at home. Alterations particularly deals with the experience of undergoing a physical reconstruction and its social-psychological affects on self-image.

The materials and processes in these works are meant to further convey these concepts. While there may not always be stylistic similarities between the pieces, they are linked by recurring concerns and through subject matter.

Most of the women portrayed in this exhibit are friends of mine who have had their own personal experience with breast cancer and reconstructive surgery. With this project, I hope to acknowledge and honor their courage and friendship as well as the skilled surgeons who carefully reconstructed our bodies so that we could be well. A special thanks to my team of doctors: Margaret Hadcock, Christopher Perkins, and Carl Askren, the latter of whom is as much an artist himself as he is a scientist.

“Variations on a Pattern”

“Illustrations for Cutting, Sewing and Altering”

“Production of the Self as the Thing Most Expected”

“Self-portrait with a Camera”

Stories that a culture tells itself reveal what it values, and nearly every culture throughout history has its own unique version of the Cinderella story. As a child, I was fascinated by the dress-making scene in the American version of this story, the ever-popular 1950 Disney animated film where mice and birds sew a dress for the rag-clad protagonist so that she might attend the ball and have a chance to marry the prince. This story version models an identity for women and girls where the beautiful and charming are always good, the less attractive are always bitter and envious, and where the right dress can magically change your identity, marital, and class status overnight.

It seems our image-driven rags-to-riches consumer culture is obsessed with fitting women and girls into this model. It is impossible not to see the fantastical fairytale princess all around us in advertisements, shopping malls, and department store windows in her ever-improved-for-quick-consumption apparel. Moreover and of great fascination to me, her predecessors can be spotted in their luscious gowns throughout Western European art history emerging into our current trope from far-away Renaissance lands, informing women’s identities long before Walt Disney put in his uniquely American two cents.

As I continue my investigation into identity from the subject position of a woman, mother and artist living in Disney-legacy America, I feel compelled to examine and raise questions about the fairytale princess – a gendered identity constructed from historical and current sociocultural influences. She is a stereotype of long term ideals and values which not only affects young girls but is adhered to and propagated by women of all ages.

“Our positionality is not fixed, but relational, a constantly moving context that constitutes our reality and the place from which values are interpreted and constructed” - Diane Wolf (Geiger, 1990, 171).

Maps and charts are drawn for many different purposes. Since Descartes’ coordinate system of describing position using line, area and points, we have been able to locate ourselves in physical space and identify patterns within these systems. Not so straightforward is charting social position.

Through the metaphorical lens of dress (or undress) as it relates to identity, I am considering the positionality of women by way of overlapping cultural references from art history, literature, and film. Controversial moments throughout history, such as the infamous Salon des Refusees of 1863, help us to see the awkwardness and arbitrary value associations assigned by social convention. I am especially fascinated by paintings which have been revisited numerous times by various artists throughout western civilization – in particular those which have provoked social controversy. It is at this positional boundary – the boundary where conventionally appropriate meets inappropriate – one can see struggles of position, value and power.

From the standpoint of a woman who often “doesn’t know her place,” I have sought to navigate my own understanding through cultural space with these paintings.

“Luncheon at the Fountain (after Manet)”

“Down the Rabbit Hole”

“I Think I Must Have Changed Several Times Since Then”