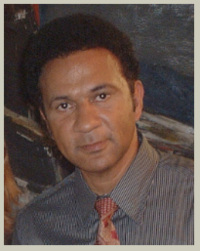 Jean-Pierre Brustier is a self-taught painter, born in Toulouse, France. He is an Honorary Citizen of the city Detroit, in Michigan, USA, and "received the keys of the city.
Complex and unique trajectory of a multiple man; his father is a Guadelupean (caribbean) and his mother Nivernaise (center France).
He has been fascinated with drawing since early childhood; the curvature of a gesture, the subtle play of the shadows and the light, the expressiveness of an attitude. He is an awarded artist and his present work deals with the "Incarnation matter".
Brustier exhibits his works internationally in the United States, Asia and Europe.

Brustier hasn't uploaded any images yet. Please check back soon!