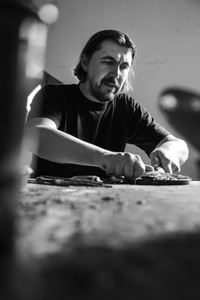 Robert Hromec (1970) received his MFA degree in painting from Hunter College in New York (1998) and his BA degree in printmaking from The City College of New York (1995). He studied fine arts at the Pratt Institute (1990–91); was a teaching assistant in the Department of Painting at Hunter College (1997–98); and worked at New York’s Metropolitan Museum of Art (1992–1998). Hromec was awarded a London Exchange Grant to study fine arts at The Slade School of Fine Art in London, and in 2002, to further broaden his horizons, he earned an ArtD degree from Slovak Technical University in Bratislava.
During his eight-year stay in New York City, Hromec experimented with mixing various art techniques to achieve his unique art language, which he calls “printpainting.”
Optical illusion plays an important role in his latest printpaintings, with aluminum plate used as the base.
His award-winning work has been shown in over seventy exhibitions throughout the United States, Canada, and Europe. In summer 1997, one of his paintings was included in a group exhibition at the Metropolitan Museum of Art in New York. Hromec’s work has also been exhibited at The Houses of Art Gallery, Red Penguin Art Gallery, and Museo Cortijo Miraflores in Marbella; United Nations Plaza in Geneva and New York; Claudine Hohl Gallery in Zurich; Danubiana Meulensteen Art Museum and GMB in Bratislava; Europazentrum in Graz; Westbeth Gallery in New York; The Slovak Institute in Prague, Budapest, Berlin, and Vienna; V. Kramar Gallery and D+Gallery in Prague; Beaux Arts Gallery in Heeze; GreCo Gallery in Vienna; and other venues.
In 2010, the Danubiana Meulensteen Museum of Art published the monograph “Twenty Years” dedicated to Hromec’s work from 1990–2010.
In December 2013, Cantor Art Press, New York published the book "Robert Hromec: New Mixed-Media Paintings on Aluminum Plate".
Hromec lives and works in Bratislava.

Over the course of his two-decade career, the Slovak-born artist Robert Hromec (born 1970) has been experimenting with materials and technology to update the form. In his latest mixed-media paintings on aluminum plate, abstract form provides the chance to explore art history in a new way.

Robert Hromec’s new mixed-media work comes out of his extensive engagement with traditional forms of lithography and intaglio, but its exciting qualities owe more to his work as a painter, specifically with color and graphic design. In its formal sophistication, innovative use of materials, and atmospheric vitality, the work questions traditional painting even as it adheres to tradition.

More than twenty years ago, while working as a printmaker, Hromec found himself with a number of aluminum plates that, though used up for lithographic purposes, seemed too interesting for him to simply discard. Instead, he began to think of them as a starting point for a new kind of painting—in essence, as a substitute for canvas.

During his eight-year stay in New York City (1990-1998), Hromec experimented with mixing various art techniques to achieve his unique art language, which he calls “printpainting.” Optical illusion plays an important role in his latest printpaintings, with aluminum plate used as the base.