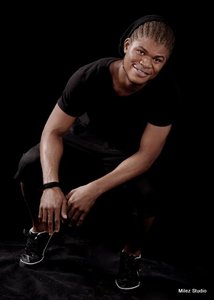 Yelloseesee (YELLOSEESEE: {one word <pronounced as the regular yellow sisi>} Is a fair reddish-brown skin colored, with dirty-gold colored hair african artist, whose works are basically inspired by light (because i shade a lot in my works) and sees where the human eyes cannot birth sight (because i do abstract arts mainly; hence the double "see")) Uwaoma was born Jidechukwu Uwaoma jude (hurray!, twins; twin sister's name is Jennifer Munachimso Jude) on the 5th of september 1984 to an artist father;Mr. Alphonsus Jude and a banker mother; Mrs. Victoria Chinasa Jonathan-Ojei.
The art gene which runs from his father through him started exhibiting itself when he could barely handle a pencil, this would later make him draw everything he sees in his "Alvin & the chipmunks" comic book into his exercise book. Going to school, yelloseesee just had fine art as one of his twelve regular subjects through out junior secondary school in Word of Faith college Benin City,Edo state. He graduated from Benson Idahosa University, Benin city, Edo state with a BSc in Computer science (second class lower to be precise) in 2007 and worked in an IT firm in Lagos for nearly two years. After parting ways with the IT firm, he personally provided IT solutions for barely four months and finally "called the curtains" on the IT world to start his studio with nothing but his black biro & resume papers neatly packed in a corner, right in his room in the family house. Ever since he has not looked back.
Asked how he coped with challenges of starting his studio with practically nothing and how he deals with everyday challenges as a young unique abstract artist in a part of the world that has not really woken up to value works of art, he simply smiles and quotes his favorite saying "everyday I wake up I murder fear and resurrect faith" while giving thanks to my heavenly father for making me see another day

COUNTING BRIDGES
This art piece leans toward motivation, for every Lagosian to rise to the "hustle call". It also provides motivation for individuals or group of people to wake up to their purpose in life especially for those living in mediocrity.

This is an encouragement to never let go of dreams and aspirations no matter how tasking or big the challenges are . This art piece is for people whose foot prints would be left in the "sands of time", trust me *smiling*.

L.i.f.e.: This work speaks of the need for anything that wants to come to fruition, to die first.

Shufferin & shimilin: The supposed smiles that overshadows the sufferings of the masses.

Wetin u cari: a man who has discoverd that his gifting can take him to places emerges from his place of solitude.

Cari go: This work is more of like a continuation of "wetin u cari". The more a gifted man works his talent the more the places his gift takes him to.

Everyday waka: The daily things we do in life

Hol am well: This work speaks of the need for the demand of accountability from leaders.

The big hands & bigger heart: A portrait of Mother Teresa of Calcuta.

The unboxed: This is the brain/mind that cannot be held down by boundaries.

Wetin mama teach us: This work speaks of the values our parents instilled in us while we were growing up.

LoL (laugh out loud): a.k.a burst laff scatter (bls), that laughter that liberates us instantly.

Get counted a.k.a Lagos factor.

Get-counted-a.k.a-The lagos factor: This work is in series and it speaks of the main feature of lagos; "get money", the yellow and black lined buses which depicts the hustle. The work is on bottle covers (which I used for counting in my toddler days), meaning if you are in lagos and you are not hustling, then you are not in Lagos, so get into the hustle and get counted.

This classic is a timeless piece from a series of 'portrait actitood' art work titled "Whispers From Madiba". It tends to keep alive the beliefs and Legacy of Mr. Nelson Rolihlahla Mandela.

Sisi Eko is a series of art work that depicts the major attraction that the city of Lagos holds for every residing individual.