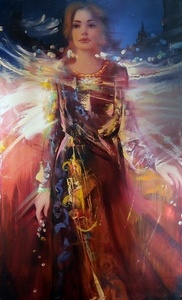 Magic symphony of paints
It is indisputable that the person inclined to drawing differs a spontaneity in expression of the feelings and flexibility of judgments. The true artist can easily present himself on a place of other person (the character of the drawing), to express the attitude towards him as same occurs in the course of the image by means of paints. In the course of the creative act the master feels pleasure of fulfillments as works instinctively, freely expressing the feelings and experiences, hopes and dreams. Through the end result of the artist it is possible to understand the relation of the master to reality (to subject composition on a certain subject).
The attention of visitors of an exhibition of Louise Albastova is drawn by the color palette of a canvas infecting us with pleasure of life Oil painting "The Italian terrace", 2013, 60H80, ? . ? strikes with the cozy landscapes [. ] charm of far Parisian streets ["Paris", 2013, 100H80, ? . ? . ; "Ancient French small street", 2012, 90H70, ] a warm cosiness of cafe ["In cafe", 2014, 100H80, oil on canvas. ] blossoming and fragrance of flowers ["The Roman balcony", 2013, 70H50, oil on canvas.] . Louise involves us in a plot, inviting to hear rain music, heat of the sun, noise and silence of a water smooth surface. Let's wander with it, we will feel heat and tenderness, cold and a fever, taste of the sun and a sea wave. Source of her inspiration  is her own inner world revealing in images of her heroes. Louise  was born in the distance from the historical Homeland in June, 7, 1987 in Kazakhstan (Kustanai). In Orenburg  she studied,  graduated (branch of the Moscow  academy, 2009), but with all the heart and a body she felt heat of the Homeland,  felt the communication with it. Mountain tops, amazing blueness of the Caucasian sky, century stone towers  were never left it indifferent to the country of ancestors.
"King", 2014, 60 ? 80, ? . ? wants to join inimitable and unique Michael Jackson [. ] to ask to the stranger under an umbrella ["The girl with an umbrella", 2013, 110H80, oil on canvas.. ; "Loneliness", 2013, 60H80, oil on canvas.] and even to walk with it barefoot on wet asphalt. Keeping eyes glued, walk not only on city streets ["After a summer rain", 2014, 60H80, oil on canvas.] but also to coast ["It is fine and wild", 2014, 50H70, oil on canvas. ; "The sail lonely", 2014, 90H110, oil on canvas. grows white. ; "A decline on the sea", 2012, 50H70, ? . ? . ] . Detain the look on the balconies covered with fragrant flowers ["The Roman vacation", 2013, 60H80, oil on canvas.]  catch eyes of the portraited ones ["Stranger", 2013, 110H80, oil on canvas.; "At a gate of a monastery sacred", 2014, 60H80, oil on canvas.; "Portrait of the Governor of Chechnya R.A.Kadyrov", 2014, 60H80, oil on canvas.] : grief and melancholy, mind and maturity, pleasure and disappointment.
Louise Albastova has opened  her own art school-studio in Grozny and teaches to young artists and designers, teenagers and adults.
Bright, filled in with a sunlight, the landscapes of a brush of Louise Albastova  are foggy and impregnated with a rain and radiate her inner world. The romantic look of the light young woman invites us to take pleasure in pleasures of world around, to remember those to whom badly and needs compassion. The philosophy of creative search of the young artist sets thinking of sense of human life, causes the mass of various emotions. And each her work  is a pearl in creative search on a way of formation of the Chechen art.
As a rule, in showroom visitors dare to adjoin without serious consequences with various images, to reconstruct the relations in various situations, to pass once again endured and secret, to give vent to feelings and experiences, desires and hopes. Here the impressionism mixes up with realism, monumentalism with pomposity of color. Repeated experience at the sight of artworks of the person of art leads to liberation, clarification from personal injuries and experiences, to strengthening of positive desires to love and be grateful for each new day.
Repeated experiences lead to weakening of injuring factors, strengthening of protective forces of an organism as a live vaccine. Louise Albastova's pictorial works give the chance to identify themselves with positive and strong heroes to whom human weaknesses ["Dark Angel", 2013, 110H80, oil on canvas.]. The powerlessness place the artist is replaced with feeling of ability to resist to the evil, to rejoice and admire, be angered and to mourn. Comprehending own and natural opportunities, we learn to model relationship, to express both positive, and negative, negative emotions. Thereby we expand the own creative range and the imagination world.
Since the early childhood Louise drew easy and freely, choosing walls of the house and sheets for drawing, transferring the inner world to a public inspection. The girl was only thirteen years old when at the All-Russian competition of drawings (Moscow, 2000) to its work appropriated the first place. The next year Louise Alautdinovna Albastova's first personal exhibition in library of N. Krupskaya (Orenburg, 2001) took place. Ability to spontaneous graphic creativity didn't weaken against occupations by music. The girl consciously looked for the correct forms, compositions, subjecting to doubts reliability of drawing, naturalism in the image of this or that subject. It never hesitated of the ability to draw though many at all didn't represent, its knowledge of the fine arts are how deep. From 2004 to 2008 Louise was trained at faculty of painting of Institute of Arts (Orenburg).

Its colors – bright, saturated, filled with force and love to world around ["Eyfel tower", 2012, 100H80, oil on canvas.; "Towers", 2010, 50H80, oil on canvas.; "Las Vegas", 2013, 100H80, oil on canvas.] .
Visits to art salons and exhibitions help us to get rid of fatigue of daily routine, to fill the inner world with a stock of energy of pleasure.  Visit  Louise Albastova's personal exhibition, and your world will be filled with desire to live more actively, to like more strongly and to care constantly of relatives. Tremendous works as oil on the canvas, created literally for the short period, leave nobody indifferent. And, if the fashionable glossy magazine "RUMORS" falls you into hands, know that it is illustrated by Louise Albastova. Listen to the magic symphony of its paints and feel a charm of life terrestrial.

Luiza Albastova. Thought and canvas
Zura Itsmiolord
Albastova Luiza was born in early June 1987 in Kustanai (Kazakhstan), and grew up in the city of Orenburg, where his parents moved in two years. Went to secondary school number 1, has received artistic and musical education there. She graduated from the Orenburg School of Art, and the second received a law degree in a branch of the Moscow State Law Academy. Since 2008, Luiza lives in the Chechen Republic. In 2012, together with her sister Elisa opened an art studio school where teaching children and adults in painting and music. Writes mostly oil on canvas in various styles.
Luiza works were interested not only in Chechnya, but also far beyond its borders. And it all started with a dream. From early childhood, the girl wanted to draw and become not just risovalschitsey and famous artist. Fortunately, parents are not prohibited to paint wallpaper. She went to the first class of regular school when her mother took her to a music school, piano class. And the girl could not walk past a class where artists worked. Yes, it is called the school of art students.
Living far from home, girl splashed on canvas his longing: the first of her stories were the mountain gorges, graceful Goryanka with jugs on his shoulders, smart horsemen on horses and, of course, cold monuments eternity - tall stone tower. Now she writes mostly cityscapes: night city, metropolis and, of course, portraits on their background.
Rain washes the streets of Paris, in which she was not, blue sea and blue sky, joy and sorrow, flowers and fallen leaves. Nothing leaves indifferent artist. And a future meeting with the city on the Seine, where it certainly will visit Notre Dame, Versailles Palace and Park Ensemble, the world-famous National Museum, the Louvre, the Eiffel Tower sees openwork will see at the top of Montmartre Sacre Coeur and the stand-Tour Montparnasse leave a mark in her colorful creations.

She is interested in contemporary art, as it is necessary to see who uses what's ability to solve certain tasks on the canvas, which uses the techniques.

Luiza did not cease to admire the life and work of the great Italian, a representative of the Renaissance, Leonardo da Vinci (1452-1519) - a man who devoted himself to science and art. This successful artist of the Renaissance belongs to a number of scientific discoveries and inventions.
L.Albastova writes in line with Impressionism, at the same time without realism almost no one picture is complete. The artist allows himself to blur the lines between the viewer and the haze of the image, thereby softening the color contrasts. Despite the enthusiasm for pop art, it is far from abstract art and modernism. Her close machinery "fast painting" when creating a work not take months, years.
- I prefer to write with your fingers - says Louise. - So I feel like canvas, to which touch to convey their thoughts.

In addition to painting, working in the studio Louise engaged in illustrating the first Chechen fashion glossy magazine RUMORS. The other day at the State Gallery held her first solo exhibition of artwork.