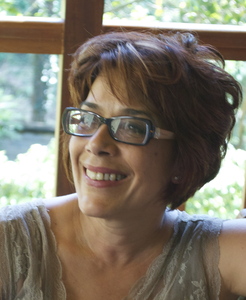 ‘It’s all about capturing what the eye cannot see, but what the mind knows is there! When I paint, it’s not so much about the subject matter. It’s about movement, the movement that is always there. I want to capture that movement, show it thorough lines and colour, express how it changes and influences the energy that is always surrounding us.’
Born in Pakistan, Naz has lived in Italy, England, Germany, Kenya, Pakistan and now Montreal. An avowed artist since her early teens, she won a scholarship to Italy where she studied at the ‘Accademia di Belli Arti Pietro Vannucci’ in Perugia. She graduated in 1986 specializing in painting and photography. The experience of the richness and discipline of the European art during her formative years in Italy combined with the natural passion for strong colours stemming from her childhood at the foot of the Himalayans make her work an interesting combination of East and West.
Naz speaks with passion about her work, emphasizing that her paintings must stimulate some intellectual reasoning within the viewer-both aesthetic and philosophical, though her work mostly deals with universal subject matter. The subject matter is more often than not, figurative, but involves much looking to make out the various forms. Her style is unique, characterized by a cubist, abstract form influenced by Cezanne and others, which she herself has exclusively developed and refined. The different layers and aspect of the subject matter are broken down into colours and lines, fascinatingly slipping in and out of focus showing movement, change and vibrating energy.