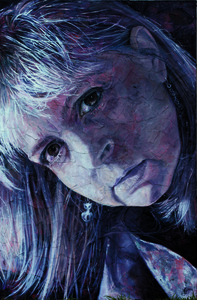 Jacqui has been passionate about art all through her life and as a child it seemed inevitable that she would pursue art as a career, but she was distracted by a sudden passion for music in her later years at Secondary School. She started to study the piano in year 9 and then after year 12 took up the violin.
She found that she learned extremely quickly and after studying the violin for eighteen months auditioned for the Conservatorium of Music at Melbourne University. She was accepted and completed a Bachelor of Music Education in 1991.
However, her passion for art remained and constantly niggled at her to return to her easel.
It was when her first child was born that Jacqui acted upon this – possibly encouraged by her son Jake’s reaction to her violin playing. It seemed that although her musical education was accelerated, perhaps the end result was not as melodious as it could be, and maybe it was time to pursue the quieter of the two artforms.

She is a well-known artist, children’s author/book illustrator and educator, with over 14 published books.
Books that she has both written and illustrated include:
• ‘Various Faerious’ (2002)
• ‘Shoes News’ (2004)
• ‘Simply Drawing’ (2010) a book and DVD demonstrating drawing techniques

‘A True Person’, written by Gabian Marin and illustrated by Jacqui was one of the 250 outstanding new international books for children and young adults that have been selected for The White Ravens 2008. The White Raven label is given to books that deserve worldwide attention because of their exceptional and often innovative artistic and literary style and design.

Her love of music has remained, but it is expressed these days through broadcasting on 3MBS fm, a Classical music station based in Melbourne. She currently does regular gallery reviews and interviews on the program Arts Weekly which airs every Saturday between 10 and 11. You can stream 3MBS if you're not from Melbourne on www.3MBS.org.au or tune in on 103.5 fm.

I try to capture a simple honesty within a subject. People change and evolve throughout their lives –behaviours, interests, priorities - the essence of who we are never changes, however, and that’s what I love to portray.

Human intellect collides with the ambiguity of the emotional self.
They are separate…one exact, the other visceral….yet also interdependent. Without one the other would not exist.
I’m fascinated by human emotion, and how it propels us forward to achieve, using our intelligence to create symbols of success that validate us.
My work explores the beauty of architecture, the corporeal form and the many permutations formed as they coalesce into surreal images.

“All the Time in the World”

These images are created from a place that comes from letting go of my mind's chatter and happily stepping back to a time in my childhood when I would simply draw what I felt.

“Science with Religion of Sorts”