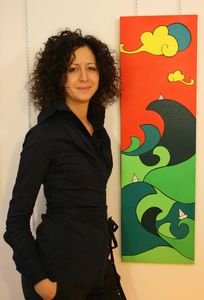 Moira Bigelli was born in 1977 in Fano (Italy).
She graduated in Eastern History in Bologna. Meanwhile her artistic flair
and passion for exotic arose.
Her artistic education was first as an autodidact then under the guidance of
art professors, from whom she learned techniques that – by growing and
maturing – have been made fit to her style and taste.
She has travelled a lot and found how to express her personal and original
point of view by meeting different places and cultures.
Her artistic expression uses vibrant softness of acrylic on canvas, which
offers an impalpable dream dimension to ideas for real.
Strong flat colours and clean lines are the high spots of her works made on canvas of unusual dimensions.
The result is a minimalist interpretation of intense emotional and
unforgettable impressions. She has taken part in many personal and group
exhibitions in Italy.
THE CRITICISM:
Her works let meditate on SIMPLICITY meant like naturalness and sobriety,
not to be misunderstood with easiness or superficiality. In her painting she makes a fine job of laborious and
delicate REMOVAL_ Her PLAYFUL side, after having skimmed, almost STRIPPED
everything, adds to the FORM an apparent casualness of colours, hardly ever TRUE in real world_ improbable colours but amazingly in harmony_ Ambiguous visions, where the form immediately suggests WHAT you look at, leaving the viewer in a true dimension where the dominant colours, by confusing, lead into the UNREAL, imaginary and amazing_ At once they let RANGE from a CLEAR to a poetic vision that only dreams can give_
Rationality and irrationality coexist in her WORKS, as well as in the Artist’s SOUL and MIND_
Moira Bigelli’s works are connected, even if without any inspiration, to
Artists such as Warhol, Lichtenstein, Adami, Urban Graffiti artists,
memorable Disney cartoonists of the ‘60s, keeping alive however her own peculiarities
that make her different from these famous Artists_
Antonio di Gaspero (art critic)
A clear language that reminds those blue sky mornings of childhood with
infinite time ahead, like virgin spaces, with plenty of potential and practical
possibilities. So here come those background painting of colours so sharp
that remind comics where everything is so stylized to stimulate imagination.
Only the most careful observer can see behind such an apparent simplicity
that light seems to burst out of her paintings.
Marco Verdiglione (painter)

some paintings about different subjects inspired from the world around me!!