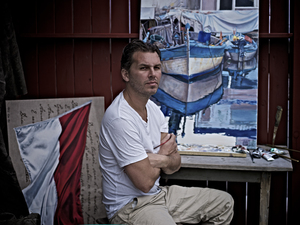 Niklas Amundson was born in 1967 on the Swedish east coast close to Stockholm. At an early age his family moved to a serene and beautiful island named Marstrand on the west coast of Sweden. There he followed in his father’s footsteps and began painting almost as soon as he could keep a brush in his hand. Through the years Niklas’ association with the sea has continued and has taken him from the deck of 138” sailing yacht S/S Gloria, to a Marstrand pilot boat and later to the Swedish Coast Guard.
In 2011 Niklas took over the famous light house island Pater Noster, four nautical miles west of Marstrand in the west coast archipelago, where you can visit a gallery and enjoy a stay at the small hotel. He paints continuously, drawing inspiration from his experiences both in the past and the present. In his own words “I receive a daily dose of inspiration through my work with the Coast Guard and ocean-close living.”

Niklas has showed twice at the annual exhibition of The Royal Society of Marine Artists. His first participation was at the RSMA’s 55th annual exhibition held at Mall Galleries in London 1999.
He is the official artist for the Ship Götheborg’s maiden voyage from Sweden to China and back. He also made the official work of art for the Volvo Ocean Race 2005—2006 and 2008—2009 and is the official Artist for Virgin Oceanic.
Represented at The Oceanographic Museum in Monaco with commissioned work of art for The Polar Expedition 1906—2006. Represented on board the Royal Danish ship Dannebrogen. Represented at The Monaco Yacht Club.
His latest collection of paintings is “The Gallery of National symbols” where he works in oil on sail canvas. He catches the movement, the shadows, and the light in the flags, which make them feel alive. Niklas collectors are found all over the world from the Island of Mustique to Monaco, USA and Scandinavia.