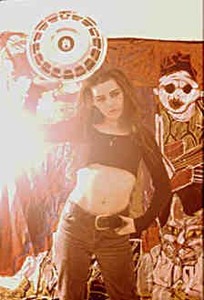 BIOGRAPHY
Hailing from England Jody majored in Fine Art at the prestigious Ontario College of Art. There she received the Eric Freifield scholarship for drawing and painting the human Figure and graduated with honours. She also received Honourable Mention for Women’s Experimental painting. In 2017 the Circle Foundation awarded Jody with Honourable Mention Award for High Aesthetic, Technical and Creative Standard of her work. Now living in Canada her work has been collected and exhibited in Canada, New York, Los Angeles, England, Amsterdam, Italy, Hawaii, Barcelona, Dublin, Zurich and Cannes. New York and Switzerland being the most frequent. Jody combines human, animal and imaginary elements in her highly original work. Jody also paints abstracts, animals, portraits, en Plein –Air and still lives. Ms. Richardson’s innovative art, which reveals formal control of her paintings medium as well as creative imagination, has earned her a number of grants and inclusion in the collection of the Canada Council amongst others. In 1992 The Famous Electric Ballroom in Camden Town, in London England commissioned Jody to do a large mural at it’s entrance. In 1996 Patrick Louburt one of the owners of Nelvana Studios in Toronto purchased a large painting by Jody for his collection. At the same exhibition Eleanor Olmstead the top lawyer for Nelvana purchased one of many of Jody's paintings. In 2020 Amer Nassar a private collector purchased a large painting for his collection. Other private collectors have purchased Jody’s work over the years.
Sculptures, mostly in metal is another art form that Jody explores. Jody also does photography. She won a National Competition. Being payed while the work was exhibited all over Canada.

Jody also has a shop on Etsy.com call SweetPearLove

jody hasn't uploaded any images yet. Please check back soon!