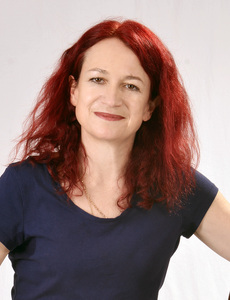 The most beautiful thing we can experience is the mystery”.
- Albert Einstein

Liz was born a twin in 1965 and raised as the eldest of five children in the NSW country town of Wagga Wagga. She still considers herself a “country girl” at heart who loves horses, dogs and the beach. Liz loved to paint and draw as a child and school student, culminating in selection for “ArtExpress”, in 1984, the retrospective exhibition of the top 5% of artworks submitted for the NSW HSC in the previous year.

Liz attended the University of Sydney from 1984-1987, attaining a Bachelor of Arts and again from 1998-1999 graduating with a Master of Teaching degree. In between study she lived in London, working and travelling thorough Europe and the Middle East. In 1996 Liz returned to Sydney and worked for ABC TV as a Production Assistant in TV Features and the show Compass. From 2000 to 2004, Liz taught Visual Art to high school students and students with special needs in Sydney schools. She also developed and managed art and transition-to-work programs for young adults with disability during this time. From 2005 to 2007 a quadrella of life-changing events including marriage, a move to Brisbane and the birth of her two daughters, inspired a return to painting.

“I paint in acrylics. Life cycles, both human and divine fascinate me and like the Fauves and Expressionists, I depict emotions through use of colour. My paintings reflect the mind and inner states, rather than action or narrative. They embody the process of contemplation, meditation/praying, and are intended as icons of healing and transformation. My art is symbolic but vibrant. I am influenced by the turbulent emotions in Van Gogh’s paintings as well as the colours and draftsmanship of Brett Whiteley.

In my life drawings and paintings, psychological aspects of my invented and true self appear through a woman with red hair in the guise of women such as Boadecia, Elizabeth Siddal, and the Virgin Mary at pivotal stages in the female journey. Other paintings vary from semi-abstract to completely non-representational and channel creation, disintegration/decay and rebirth. I am also moving into Graphic Design and hope to specialise in illustration.”

Liz’s artistic goals are to win the Blake and Wynne Prizes in Australia at least once, and to be internationally recognised and acclaimed.