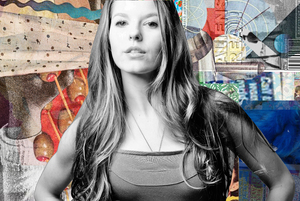 Artist, filmmaker, photographer Sam HEYDT shows artistic range in her images. Her work has been described as “poetry in composition, static moments of documentary, aesthetic innovations of fashion and a quirky nod to commercialism”. Over the last decade, HEYDT has lived and worked in Paris, Amsterdam, Buenos Aires, Venice, Vilnius, Udaipur and Sydney.

HEYDT completed her studies across a spectrum of international universities including Parsons School of Design, Universidad de Buenos Aires, La Sorbonne and the Universiteit van Amsterdam, and has been an artist in residence in Iceland, Australia and New Zealand. She has been awarded several domestic and international accolades such as: The Aesthetica Art Prize: 2014 | The Contemporaries Foundation: 2012 | Art Director Club: 2009. She has also undertaken a range of non-profit work in developing countries, her most recent project being in Rajasthan, India where she helped produce a documentary on child prostitution.

Commercially, HEYDT has shot for a multitude of fashion magazines and has been featured by art publications such as Modern Painters. Her bevy of clients include: Aesthetica Magazine, W Magazine, Visionaire, NoWhere Magazine, Getty and Vice. In 2012, she launched Jane Street Studio, a boutique photo-studio & production house in the meat-packing district of Manhattan (www.jane-street-studio.com).

Ironically employing the very medium she critiques, HEYDT’s work speaks to the disenchantment of the social psyche at the hands of the media and the desolation of the natural world. United by its unconventional exploration of semiology and its role in cementing corporal commodification, consumerism and constructed narratives of the past, her work splinters into several subversive series focusing on the perversity of production, absence of destiny and beauty in banality. Heydt’s visions transcend her images’ site-specific locations — the impact of the photographs are shockingly universal, rendering the global local.

Truth is Beauty, beauty is truth- that is all you know. Yet, illusion won’t free us from reality, even as the sustained narrative of tabloids becomes history and the myth of progress continues to perpetuate invisible violence. The transformation of the global landscape under the weight of industrialization is central to my work, as is the residual of consumption, the mutability of history and the material inequalities of a world reduced to a bottom line. In its inexhaustible invention of deduction and speculation, photography is nothing more than a chemically processed imprint causally connected to reality- bound to neither truth nor objectivity, but the subjective and universal. The story of my life is the story of the world.

“A different sort of love”