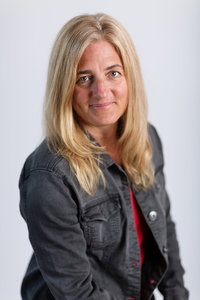 As a child, born in Denver, Colorado, and growing up in Scottsbluff, Nebraska, Sandy Graves first
displayed her work at the county fairs as a 4-H member. As she continued her education, she worked
in many different mediums. Sculpture was always a favorite and came naturally.

Graves sees bronze sculpture as being a friendly and beautiful medium. She enjoys watching the
public interact with art. In sculpture, viewers can walk around it, touch it, and become part of the artistic expression in a very personal way.

After graduating from CSU in 1993 with a degree in fine arts and a concentration in Sculpture, Graves
began work as a high school Art teacher in Steamboat Springs, Colorado, and continued in that field
for 16 years.
In 1999 Graves cast and sold her first bronze sculpture. Since then she has continued to work in the medium realistically and abstractly. She has been awarded and completed three significant commissions. The first was a portrait of the founder of the Lowell Whiteman School. The second was a life-size student for The Scottsbluff Public School foundation in Scottsbluff NE. The third and largest was created for the Steamboat Springs Chamber of Commerce, and has been installed on the Courthouse lawn in downtown Steamboat Springs.
Realism and abstract styles have both been popular for her. Graves' enjoys making her wildly expressive series of abstract horses. It is a familiar subject for her as she owned and rode horses as a young girl. They have always been in her art.

Tango is a sculpture depicting a mature regal bird that is the Queen of her realm. I sculpt the attitude of an animal or bird not necessarily the body.
I love the challenge of communicating the emotions I want to express in a non-verbal way. Tango is the second Great Egret that I have sculpted. The first
“ Dance” was putting on a showy performance with his wings outstretched. This egret just needs a subtle sultry pose to express her power. My use of negative space allows for the viewer to add their own interpretation, of course.
28.5"x9"x4"
edition of 35
Fine Art Bronze
2015

This sculpture was inspired by the Pro Challenge starting in Steamboat Springs where Sandy Graves lives and works.
9 cyclists
40"x9"x5'
Edition of 35
2015
Fine Art Bronze

“Thrill of the Chase”