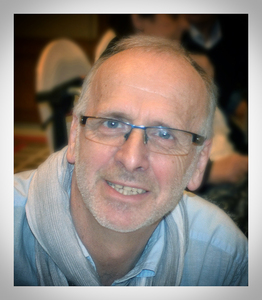 After a few years of film camera photography, Yvon made a 30 years break… And finally rolled back in with a digital camera alongside with Photoshop.
According to Yvon, this new “Dark Room” is far less expensive and open to most photographers.
The acknowledges his post-war masters for their deep influence, Doisneau, Ronis, Boubat, Kertescz, Brassaï and of course Cartier-Bresson.

“The peaceful and soft atmosphere one can feel in their pictures has always attached and influenced my work” he says.

The first camera I’ve seen at home when I was a boy was a Polaroid that made small photos in black and white. It was just magical to see appear on the paper an image in black and white live! I think that the virus was inoculated to me at that moment. Later my father offered me my first camera, a Kodak Instamatic. Then I discovered the magic of developing black and white film in the photo club in my village. I bought my first Reflex Camera when I was 20, an Olympus OM1 and my first development kit at the same time. I practiced the photo in black and white for 4 years, and then I put aside my passion for 30 years. I went back to take pictures for 9 years.

“For me,” Yvon Buchmann says, “photography is capturing fleeting moments,” and in his pictures, those fleeting moments are effectively captured. The artist notes that his goal is to show the simplicity and poetry of everyday life, and in his elegantly composed black-and-white photographs even the most casual scenes are given a presence that makes them compelling.

The photos shown here are representative of all of my work.

“On the roof of the Oslo Opera”

“Who pulls the strings”