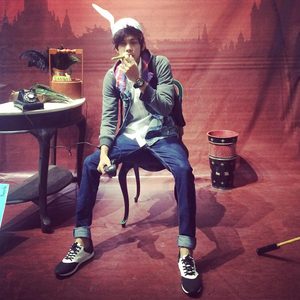 This young artist shot to fame in November 2012, with his famous portrait of Mr Obama painted on a wall in central Yangon, 24 hours before the President arrived. He captured the spirit of the moment with his exuberant "Welcome" message beside a wonderfully lifelike rendition of a grinning Mr Obama. Arker Kyaw, just 19 at the time, was completely unprepared for the storm of media attention that broke over his head a few hours after he completed this iconic work. Since then, his feet have barely touched the ground, as opportunities line up for him and he explores different outlets for his creative energies.

Although known mostly for his street art, Arker Kyaw is an accomplished painter of both abstract and figurative works on canvas, using brushes as well as his favored spray cans. This is the first time that an audience can see the versatility of his young artist, with a range of his artworks together in a gallery show.

Arker Kyaw grew up in Yangon, attending high school here, where his artistic talent was quickly recognized. He says he was a very average student, but he won all the drawing competitions. He really tried to get some tertiary education, starting at Dagon University, but finding it completely art-less, he moved to the University of Art and Culture, studying painting. But that seemed irrelevant to him too – there was no exposure to contemporary art, and the first year students were forced to "learn" the most basic techniques, whatever their level of skill and experience. Arker Kyaw was already far beyond the basics by the time he was out of school.

Even in this digital age, where there are few job possibilities for artists, Arker Kyaw managed to scrape together a living from his art. For a while he did quick portraits for tourists in Kandawgyi Park; later on, he taught himself how to tattoo and did a brisk trade tattoing his friends. When that dried up he moved to Mandalay working for a factory that was producing carved marble Buddhas. His job was to paint the eyes and the lips of the Buddha, and although he found it restrictive, he laughs and says, "I'm pretty good at painting eyes."

He had always been tempted by street art; at the age of 15 he would go out in the evening, and find places to paint his nickname – "Night". He had pocket money of 200 kyat per week, one can of spray paint cost 1,500 k, but luckily one of his friends had a bit more money and they would buy three cans and gleefully head out on a painting spree.
But a journalist noticed how "Night" was popping up all over town; his Mum read about it in the newspaper and that was the end of the evening forays – for a while.

The life-changing moment back in November 2012 was not his first night-time assault on a wall in Yangon to paint the portrait of a famous man. One year prior to Obama's visit, when the Myitsone dam was cancelled and Thein Sein was riding high in the eyes of his people, Arker Kway painted the Myanmar President with the message, "We Love President Thein Sein." He finished the work at 4.30 am, by 10.00 am it was gone, painted over by zealous YCDC workers. Almost no-one got to see that work; but take a look at the video on display and you'll see Arker Kyaw, in the dark of night, on his solitary journey to pay tribute to Myanmar's president.

After this exhibition he is headed for Indonesia, as the Myanmar representative at the 25th anniversary of the ASEAN New Icon, Pop Art festival. He will then be working on a major commission to produce a huge work of public art. Details to be announced.

Whatever the future holds for Arker Kyaw, we can be sure he will continue to seek that direct connection with his audience, to reflect back to us our thoughts and preoccupations in a way that touches us or makes us smile For that is the power of art. When Arker Kyaw speaks about his future, he says, "There is so much I want to do, and to create. But for sure, I will never be without art."