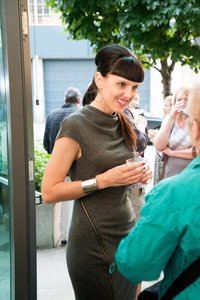 Holly Marie Armishaw is a Vancouver-based artist who graduated from Emily Carr Institute of Art and Design with a BFA with Distinction in Photography. Her work has been exhibited and published in Canada, the U.S., France and Brazil, including venues such as the Mass MOCA (North Adams) and MUBE (Sao Paulo). Canadian venues include Dazibao (Montreal), YYZ (Toronto), and the Presentation House Gallery (North Vancouver). She has used digital imaging as both a technical and a conceptual tool in her work since the cusp of the digital photographic revolution. Her first critically acclaimed series, Les Mondes Frax 4D, was published by Editions J’ai VU, in Quebec City in the book “Feintes, Doutes et Fictions: Reflections on Digital Photography”. Her “Marie Antoinette Series” exhibited in the inaugural Capture Photography Festival garnered many positive critical reviews and won an international competition in 2013. Holly devotes her spare time to the art community and has recently served as Vice President of the Contemporary Art Society of Vancouver. Recently, she led a panel discussion on Women and Self-Representation in Contemporary Photographic Art. She is also an aspiring art writer.

Digital imaging is not just a technical tool in contemporary art, but also a conceptual form of expression. This photographic series gives form to metaphysical concepts such as those discussed in the cosmological studies of quantum physics. More specifically, the digital morphs represent portals to another dimension and are an allusion to today’s most highly respected theory of the universe - the “wormhole” theory. Wormholes are hypothetical portals that bridge the space-time continuum. The images are also metaphors, which may be subjective in meaning for each viewer. For some they may represent something of longing - material, spiritual, or otherwise. For others, these images may represent fear of the unknown, perhaps alien or menacing. These digital composites combing 2D imagery with 3D illusions represent additional dimensions or other universes where infinite possibilities are realized and each of our subjective interpretations of reality are possible.