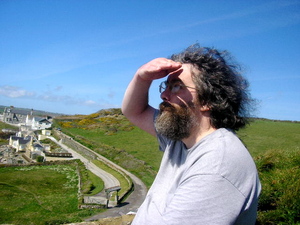 My paintings are full of imperfections. This is the way that I want them, I am philosophically opposed to “perfection” in art and I don’t believe that it exists anyway, here on Earth. Man is a fallen creature who kills and maims his own kind repeatedly; maybe God is perfect, but there are no perfect human beings. I am concerned with God and His will on Earth; I believe that the Creation of God can be seen everywhere, if one has eyes to see and ears to hear. By God I mean the ultimate creator of the whole universe. God reveals himself through nature, and by strange sequences of events commonly regarded as “co- incidence” “serendipity” and “synchronicity”. In my paintings there are elements of “chance” which I have emphasized in paint. I rely on the channeling of spirits and the karma of God whenever I paint; this is the thing that fascinates me about painting, and keeps me going. I am opposed to the idea of the regulation and policing of art; that is fascism. Art has never harmed anyone. The police have.

My paintings are analogous to jazz and rock music. I am fully Rocked, and I have been since I was a teenager, mainly by the MC5 and Hawkwind. Recently I have begun to paint musicians and artists from photographs that I have found on- line. I never copy anything, but I enter the spirit of the artist I choose, and thus paint the artist in the way that I see them. It is a bit like walking along the “Walk of Fame” in Hollywood. It is the artists you choose that are significant. I live in Cornwall the most south- westerly extreme of the UK. It was here that I finally found peace, and communion with nature, and a relationship with the sea. It was from observing the sea that I learnt to paint in oils.

I am a dissident UK. artist. My work is only for aficionados. I have travelled extensively in Europe, I am an an admirer of Rouault, Soutine and Van Gogh I use oil paint because it is a far more flexible medium than acrylic. I have emphasized the irregularities and texture of my paintings over the course of thirty years. Each of my paintings is entirely different from the other, I believe that it is essential to exploit the awkwardness that arises from the human condition, rather than to aspire to an ersatz notion of perfection. There is a great deal of different texture in my work which is impossible to achieve using the nasty acrylic stuff. These textures and surfaces produced from oil paint are essential to the appreciation of the paintings, I never like to repeat myself; whenever I begin a new painting I create something original and new. I am fundamentally an expressionist, I am influenced by abstract expressionism; often I have to leave my paintings in a horizontal position to dry, just as many of the abstract expressionists did.

My paintings are full of subtleties and nuances related to texture and touch which only the cognoscenti can understand. The paintings of the Porthleven Harbour of refuge are about ninety percent done outdoors. I believe in the magic of plein air painting. As a student I worked in gloss enamel paint and coal tar solution. This experience has informed my current work. I think of myself as an avant -garde artist, and not someone who wants to “turn the clock back”. I am also influenced by the minimalist movement, I create patterns in my paintings which are at times simple and almost geometric. It is impossible as an artist not to be influenced by all of these avant- garde tendencies. If you are obsessed by art then my work is for you! You can read my autobiography called “The Boogie Man” which is available from Amazon. My website is at www.douglaslyell.com

Ways of Looking At

When I write, just as when I paint I always try to avoid cliches. There are such things as visual cliches as well as verbal ones. I feel that I have a god given right to free expression; millions have died for this right over the centuries and therefore I feel impelled to use my rights and my freedom of choice to their fullest extent. These rights and freedoms are now under grave threat, not by terrorists; more people die on the roads every year, but by the government and the fascist police state who as the years have rolled by have become unaccountable, thoroughly corrupt, and degenerate, ready to work for the highest bidder. They are just waiting for another war for everything to revert to a more stable equilibrium. I am a mind fucking Winston Churchill working behind enemy lines like an SAS operative, with an Ack Ack gun on the back of a jeep. Eight years ago I moved to Cornwall. I have never felt such freedom as I do here near the sea; the sea will be god’s instrument again to cleanse the Earth of all of the rot. All of the pussified fagotty cities have been drained of real culture and art. They are being herded together ready for extermination. There are powers possibly extra terrestrial in origin who have been observing the earth and do not like what is going on here. Now they have the power over marriage; what about births; will we be talking about gay births soon; or perhaps gay deaths? I realize that some people do not like art because “they can’t do it”. What do they expect? You wouldn’t expect to be able to do brain surgery right away. It takes decades to become a mature artist. It is a profession like architecture or medicine. Of course they do want it like that because the proles have a route to the top this way. They always refer to their imaginary prole who can’t understand their high art and is ignorant of painting. Their art is patronizing and meaning -less. Mad johnny boy and his private army of finks and gimps from his penal colony have had no affect on me whatsoever, despite all of their psi attacks. I have to contend not only with these violent psi assaults but also with the micro- wave torture administered by the British government. These things can drive you crazy; it took me years to distinguish the two forms of attack which were initiated at the behest of old mad johnny boy because he didn’t like the cut of my jib. So let us not look at paintings in a logico left brained phallic way with reference to police words such as sterile, forensic, accurate, detailed; these issues should be dealt with early on in the career of an artist when one has just started drawing in a committed fashion. Let us make room for magic, spontaneity, life and the unconscious. Surely the magic of painting lies in the interplay between the unconscious and the conscious mind. It takes hours and years to explain this to an englishman. Painting is about far more than mere appearances, it has to do with psychology, and the manifestation of the spirit and the subconscious soul of the artist. So let us give up the wax phallus of the conspirators, and make room for thinking and meditation. Let us demand meditation breaks when working. Let us explore polarities and make approximations. This is all that human beings are capable of.