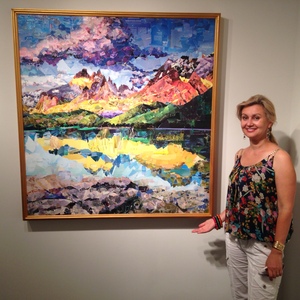 Nataliya Scheib is a Ukrainian-born artist who currently lives and works in Houston, Texas.

Nataliya began drawing at a very young age. Growing up in Soviet Ukraine, she did not have art supplies readily available, so she used all kinds of found materials to draw with, such as sticks, pieces of red and white bricks, and dry clay pieces that would fall out of the exterior wall of the houses. At the age of ten, Nataliya entered the art school in her town to complete a 4-year intensive and structured classical training in drawing, painting, and composition. After graduating, Nataliya went to college to study architecture and received a BA degree in Architectural Engineering four years later. She began her career as an architect working with the Chief Architect of the City Bureau and a year later applied for a Master’s Degree to Kiev National Technical University of Civil Engineering and Architecture. After five years of study Nataliya received a Master's Degree in Civil Engineering majoring in Urban and City Planning, while she continued working as an architect.

A few years after Nataliya moved to the US and organized her new life, in 2009 the family moved to Houston, Texas. In 2012 she enrolled in art classes at the Museum of Fine Arts Houston Glassell School of Art. And in early 2014, Nataliya opened her own studio at Silver Street Studios, where she continues to challenge herself. Nataliya is always enthusiastic about any opportunity to continue her art education by participating in diverse art classes, workshops, and art residencies.

Nataliya’s work has been included in a number of art exhibitions in the U.S. and in Europe. Some of the national places she has exhibited include Lawndale Art Center in Houston, Texas; North Gallery Department of Art and Design of San Jacinta College in Houston, Texas; Avis Frank Gallery and Gallery M Squared, both in Houston Texas; Fine Art Museum in Gadsden, Alabama; Nicolet Gallery at Nicolet College, Wisconsin, Dacia Gallery, New York City, New York, and others galleries in the U.S.

Additionally, Nataliya’s work has been selected for the exhibitions by National Association of Women Artists; Oil Painters of America; and National Oil and Acrylic Painters Society.

Nataliya also has received several awards and honors, and a Special Recognition Award for Outstanding Art for her oil paintings, and her work was included in Artist Portfolio Magazine, and ArtAscent Magazine, among other publications. Nataliya was selected among 79 artists of the United States to be included in the publication Art Buzz “The 2014 Collection, Volume 7."

This year Nataliya have been selected to participate in two Intensive Art Residencies in Berlin, Germany.

Theme: "From Here to Where?

Made from original posters on Berlin
Dimentions variable

Made from original posters on Berlin
Dimentions variable