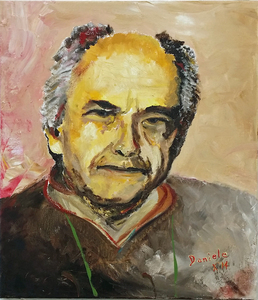 Daniele Vannucci was born in Florence, where "breathes" the colors, forms and lights of the beautiful city's art.
His father was a keen collector of oil paintings, and this stimulated the creativity of Daniele since the years of youth.
In his youth, he began to be interested in the graphical representation of objects by highlighting the forms in their essence. It used in this first period almost exclusively pencil, charcoal or ink.
Later he went to live in the Chianti countryside, between Florence and Siena. The enchanted places of the wild new destination, take him by the hand and lead him through new paths, which give him a clear impression of the pictorial expressions of that moment. In that time, he approached watercolor. The lightness of the expression of the colors and the blurring of boundaries was ideal to represent the soul of the things that struck his imagination.
Just with the watercolor, Vannucci Daniele started getting the first awards, which stimulated him to “seriously” continue painting.
Subsequently, his work leads him to Rome (director of a Research Structure of the Ministry of the Agriculture). He decided to establish his residence in the nearby Roman countryside, from which you can see Rome at a certain distance, through a sea of olive trees. The gentle hills that slope down towards the plain of the Tiber and the heart-breaking sunsets, so evidently influence again the works of that period. It is here in Rome, that he discovered that the oil painting had its peculiarities of expression, and he used this to give life to their new ideas and inspirations.
He currently lives in Viareggio, where the city's Carnival is able to give him a new artistic path where you can read the unique essence of life that flutters in Versilia. At the present time some effects are clearly visible in his works made in the early years of his stay in Riviera.
A careful study of the subject characterizes his work , as well careful observation of the relationship between light and shadow, enriched with intense colors and pictorial traits not clearly defined, leaving the viewer the freedom to interpret the becoming of the work.
His latest paintings are made almost exclusively with oil on canvas, which allows him to create the best way his favorite subjects: scenes of everyday life and shot some people.
Do you like to know how he chooses their subjects? Well… it will be a pleasure to explain it: let us follow him!
IMAGES
Inexplicably, simple images of every day life
sometimes strike my imagination.....
and suddenly dive into that corner
of memory, where they bind to with the archive
of feelings, emotions, pleasures or frustrations
that life every day gives me.
Here, suddenly, some of those, shameless
reappears to present adorned with new clothes, stolen
here and there by his silent mates presenting
under new appearances, accomplice my imagination.
And it remains there in the foreground, unforgettable and unreal,
until I decide to give her attention.
And then that begins to move: draws light spirals
with its milder profiles, describes precise shapes
with its more defined parts, turns its colors on all
the rainbow's keys, sometimes favoring just a few .
Almost always leaves some parts not well defined and foggy,
sometimes in the darkest shadows .... sometimes the sparks of light,
as if to entrust me the task of solving ....
It is wonderful the message that now I understand .....
a shiver runs through me and I feel kidnapped:
A canvas, a paint-brush, some color ....
and flies the hand guided by the heart!