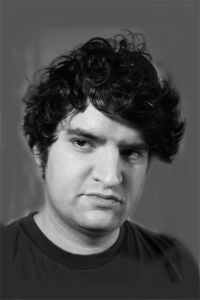 Evan Goldman is an artist currently focusing on portrait and figure painting. He exhibits his work regularly in the DC Metropolitan area and teaches painting and drawing at Montgomery College in Maryland.

Evan’s passion for figurative art dates back to his childhood where he regularly visited the National Gallery of Art. As a teenager, he dedicated himself to learning realistic oil painting techniques and had the opportunity to paint in Italy, France, and Greece.

He attended Maryland Institute College of Art (MICA) where he continued his exploration of portrait and narrative painting. After graduation he enrolled at the New York Academy of Art. The New York Academy’s emphasis on figurative art helped him develop his artistic voice.

After receiving his MFA he traveled to Norway to study under Norwegian classical painter, Odd Nerdrum. During this time he became immersed in the study of old master techniques and continued his passion for dramatic figurative paintings.

Evan also studied under the renowned figurative artists, Robert Liberace at the Art Students League in Virginia and David Gray at the Flemish Atelier in Bruges. In the summer of 2016 he will be participating in the TAKT Berlin artist residency in Berlin.

My “Multi-Bodies” series explores the dual identity of people when portrayed as clothed portraits versus nude figures. The people in the paintings are depicted at life size to emphasize their presence while the figures in the background are portrayed in photographs posted on the wall or as images printed on peeling wallpaper. The personality of the subject is conveyed through facial expressions and poses. I draw inspiration from great masters such as Rembrandt and Van Dyke, and my use of multiple figures draws similarities to Eadweard Muybridge’s photographic “Studies of Motion”.